Paula Scher’s appearance at the Design Manchester conference has been a highly sought-after event for years. Conflicting schedules and prior commitments have previously prevented her involvement, so when she finally walks out onto the 2019 stage, it is to rapturous applause from the 1,500 people in the audience.

In her near-50-year career, Scher has designed for some of the world’s most recognisable brands. From Microsoft, Bloomberg, Citibank and Tiffany & Co., to vast sections of New York City’s cultural landscape (including but not limited to: The Public Theater, the New York Philharmonic, the New York Botanical Garden, Jazz at Lincoln Center, the Museum of Modern Art and the New York City Ballet) and beyond, her work has made her an influential designer, teacher, and talking point.

But as she explains in her Design Manchester talk, and later in conversation with Design Week, the path of her career has not been a straightforward one. 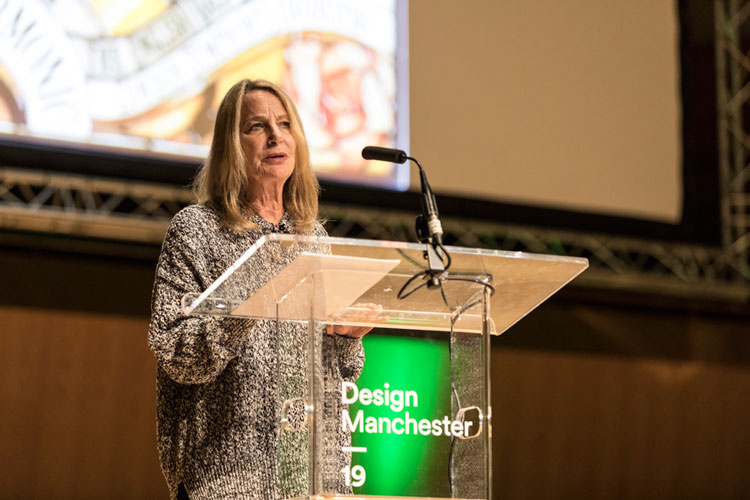 “I didn’t even realise I had a good job”

After graduating with a Bachelor of Fine Arts from Tyler School of Art in Philadelphia, Scher moved to New York. In 1972 she began working in CBS Records’ advertising department, before moving to competitor label Atlantic as an art director, and then finally moving back to CBS a year later.

“We were doing around 150 album covers a year,” Scher recalls, adding that clients included the likes of the Rolling Stones, Sonny and Cher and Bruce Springsteen.

“I didn’t even realise at the time that I had a good job,” she says. “In fact, most people didn’t really know what a graphic designer was back then – sometimes it was called graphic design, other times commercial arts.”

While there might have been confusion over job titles, Scher notes that overall, it was a much simpler time to be a designer, perhaps for the opposite reason one might expect. “We made everything ourselves, and it actually used to take me less time then than it would now.

“Now when people design on a computer, they’ll do it in a day sure, but then make changes for three weeks – when I was first starting out, you’d use those three weeks to actually produce the cover.” 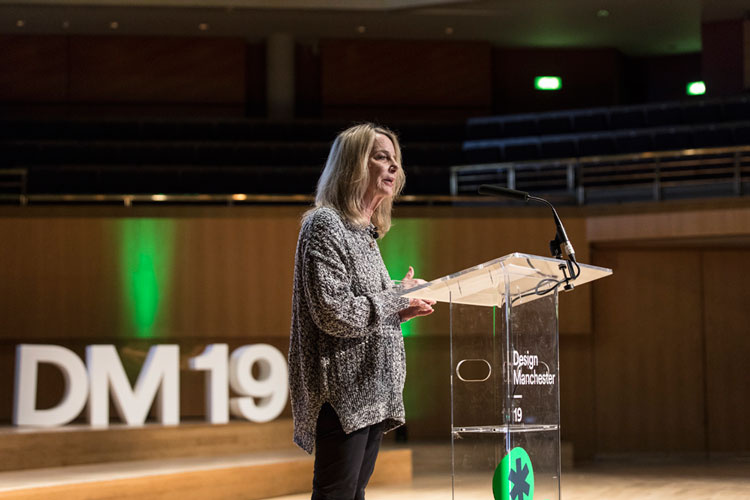 “Technology is not the problem, people are”

The cutting edge of technology has never been where Scher has positioned her design practice. In the early days of her typographic work – after setting up her own studio in 1984 with fellow Tyler SoA alumnus Terry Koppel, under the name Koppel & Scher – it was art history books showcasing old art deco and constructivism typefaces that won her favour.

In fact, to this day Scher remains somewhat sceptical of technology’s effect on design. “The computer is a spectacular invention, and I couldn’t do the three-dimensional work I do now without one.

“But it’s not about the technology, it’s really about the people. The problem is that because you can achieve things so quickly, it has made people very sloppy and lazy,” she says.

Scher adds to this the experience she’s had teaching at New York’s School of Visual Arts for the last 37 years – wherein she has seen countless iterations of “cutting edge” tech: “I used to teach before there were computers.

“And then when schools got computers, there was a period where you would teach a class and the whole thing would be about how some students couldn’t get a certain typeface on their computer.

“There was a period of about six years while everything settled down where I think the work was crap.”

“It was so sexist it was good for me”

Throughout her early career, Scher often occupied spaces as one of the only women in the room. Of her time designing in the music industry, she tells Design Week: “It was so sexist it was actually good for me”.

She recalls being able to use her quick wit and humour to bring people around to her way of thinking, saying she was “a total smart-ass.” According to Scher, this was her technique as a woman in the business. “Being a smart-ass contributed to my ability to have people take me seriously,” she adds.

But later on, being a woman in a heavily male-dominated profession would prove difficult and restrictive. After Terry Koppel left their joint venture in 1989 owing to recession, Scher was left to pilot the business herself. “It was there that I realised the kind of work I was getting was never going to change.

“I knew it was because I was a woman, and I knew that if it was a bigger job than the one I already had, I wouldn’t get it.”

Scher cites this as one of the reasons she joined Pentagram in 1991, as the organisation’s first female partner. “Everything changed when I joined Pentagram, suddenly I had a name behind me.”

“I felt I had failed”

A career as long-lasting and varied as Scher’s is bound to throw up some adversity from time to time. In her speech at Design Manchester, she identifies two such occasions. The first she mentions: her first piece of work for New York’s Public Theater in 1995, a partnership that has since lasted decades.

The work in question was a poster series for Savion Glover’s Bring in ‘Da Noise, Bring in ‘Da Funk. Utilising wood typefaces and appearing across the city, her work was iconic and impactful. Too impactful, according to Scher, who soon found her work had been adopted by theatre’s and the wider city.

“It became a style emblematic of the city, not The Public Theatre,” she says. “It’s a terrible thing to design an identity and have a city eat it – I felt I had failed.”

The second: her infamous “copycat” Swatch Watch poster from 1984, on which detractors claimed Scher had appropriated Swiss graphic designer Herbert Matter. “It was horrible for me because I received so much criticism for it, but I don’t know if I could call it a failure.”

What had in fact happened was Scher had both purchased the rights to use Matter’s poster, and obtained permission from his widow.

“I didn’t actually get criticism for it until about three years after I had designed it – but it made me very timid about being so arrogant.”

But it wasn’t without it lessons. “I’m glad I had that experience then, because it has made me steely for what I experience now,” she adds. “With the blogosphere now, you put work out there and 20 million people hate it.”

“I’m teaching them what I know”

“You have to learn to have faith in your own judgement and ultimately just be able to persuade someone else to it.”

This is what she teaches her students, she says. “I try to teach them how to think and solve complex problems – I’m only teaching them what I know.”

Since its inception, Scher’s career has since expanded across disciplines, from typography, to graphic design, painting, interior design, 3D design and beyond.

She says moving in different areas is how she stays interested: “I’ve been doing this for literally 50 years and I’m not sick of it yet.”

Alongside her speech at Design Manchester, a selection of Scher’s work is also on display at Manchester School of Art, M15 6BG until 7 December. The exhibition is free to attend.

Stormzy’s album design: “We wanted it to feel like a Renaissance painting”

Will variable fonts be the big type trend for 2020?

Geffrye Museum of the Home drops namesake in identity overhaul