“When it was first adopted, digital design gave way to huge creativity in the industry, we were able to do incredible, beautiful pieces of work,” recalled Anna Money chief designer Daljit Singh onstage at Design Manchester’s DM19 conference. “But in a digital world where you expect things to be really experimental and beautiful…we now live in a world where things are incredibly flat.”

The “homogenisation of design”, as Singh puts it, has been well-reported of tech companies the world over. But beyond the likes of Uber, Google and Apple, he says even some of the world’s most design-led companies have fallen victim to “sans serification”. And the result, Singh says, is an industry that often prizes “normality” over creativity.

Having your own arsenal of ideas

But how do designers fight against the wishes of clients, when so many are asking for the same thing? For Singh, it’s all about designers’ side projects.

Singh now works for Anna Money, a challenger bank for the creative industries. But in the early days of his career, he founded digital design agency Digit, regarded as one of the first studios of its kind. “Digit was all about personal passion projects,” he says, “for us, experimentation was what it was all about.”

And by doing so, he says, the team were able to net the big clients they did. Speaking to Design Week after his talk, he added: “Sometimes pushing the boundaries isn’t possible, because things are set in stone and you need to get the job done.

“But at its heart, design must be something creative and having your own arsenal of ideas that you’ve developed yourself is an incredibly useful way to show clients there are other possibilities beyond ‘normality’.” 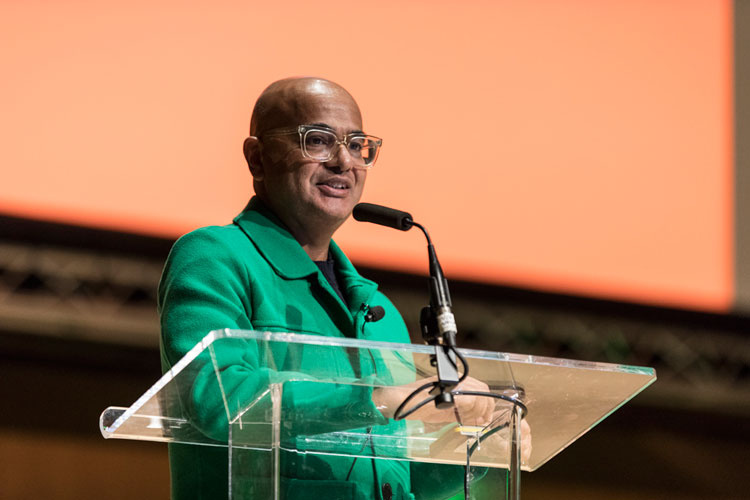 But side projects don’t just exist as an outlet for creativity, according to Singh. They also work to bolster the confidence of designers and their understanding of the industry.

“Designers can sometimes be really ill-equipped to apply their design in a particular way, because they have little understanding of the reality of what a business is trying to do,” he says.

Singh points to his own experience in launching a range of sausages, Mr Singh’s Bangra Sausages: “You can learn a lot from doing something outside of your comfort zone.”

While it may not have been a successful venture in the long-run, “doing it for himself” allowed it him to experience the needs and requirements of the commercial side of the industry was invaluable, he says. He urges designers, therefore, to “be brave” in their side projects, since lessons can be applied across disciplines and ventures.

Sometimes, its not about the success of a passion project, more just the fact an “itch is being scratched” – especially when you aren’t getting it from clients. “We all need a bit on the side sometimes,” he says.

Will variable fonts be the big type trend for 2020?