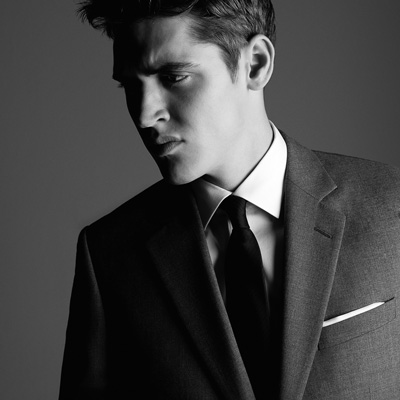 D-Raw Associates has been appointed to redesign the menswear section of the Reiss clothing store in Market Place, central London, ahead of the launch of Reiss’ new bespoke tailoring concept.

The bespoke tailoring concept (pictured) is set to roll out to ten other stores across the UK.

The group was appointed without a pitch, having worked with Reiss for more than ten years.

Chris Lees, project manager at D-Raw, says Reiss owner David Reiss approached the consultancy in September, asking for a store with a ’twist’ for the new tailoring concept.

Structural work has begun, seeing the wall of the accessories area knocked through to create a single retail space.

Andy Rogers, Reiss brand director, says that he worked very closely with D-Raw on the brief and retail concept. He says, ’We try to push our stores architecturally all the time. They’re very theatrical, we don’t have a “cookie-cutter” fit.’

He adds, ’We try to play with the materials and create product-specific areas depending on the market – that’s the inherent brief.’

Rogers says that the new store will have a ’raw edge’, incorporating its interior features, including brickwork, brass panelling, oak flooring and ’raw concrete’ walls and columns, alongside black steel clothing rails and a bronze mirror.

He says male shopping psychology heavily informs the design. ’We’re being very upfront about the concept,’ he says. ’It’s very simple, organised and direct. Guys will find a reason not to buy things – you need to spell it out.’

Lees says the consultancy was briefed to create interiors with a ’retail theatrics’ influence. ’It’s a mix of contemporary and Savile Row style,’ he says, adding, ’We wanted to make sure people were walking not into another Reiss store, but something a little bit special.’

The store will include ’theatrical corner pieces’ and display cabinets for different elements of the suits, such as collars, cuffs and fabrics, with wall displays of suits in different cuts and styles.

Lees adds, ’There’s a big visual merchandising hook – you’re looking at the nitty-gritty of putting the suit together. It’s about the clarity of what’s on offer.’
The store is set to open early next month.