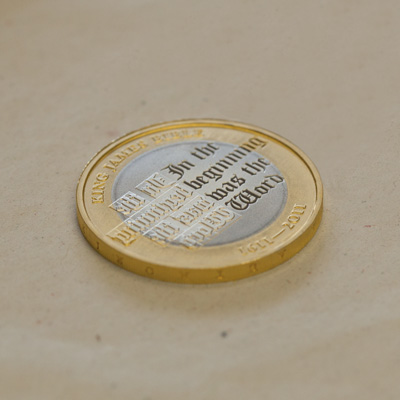 The Royal Mint has commissioned Design Studio to create a new £2 coin celebrating the 400th anniversary of the King James Bible.

Design Studio was invited to pitch for the work against four artists in October 2009.

Paul Stafford, Design Studio founding partner, says, ’We wanted to create a design that was a representation of the printing process.’ He adds, ’It’s something a bit new and exciting, with a contemporary edge.’

Design Studio’s coin uses a quote from John 1.1, with the reverse text raised, and the correct text recessed to represent the printing block and paper.

Dr Kevin Clancy, secretary to the Royal Mint advisory committee on the design of coins, medals and seals, says, ’[Design Studio] addressed the aspect of the anniversary being about a significant moment in publishing history particularly well.’

Life on the wall

The One Off works on Kickers retail concept