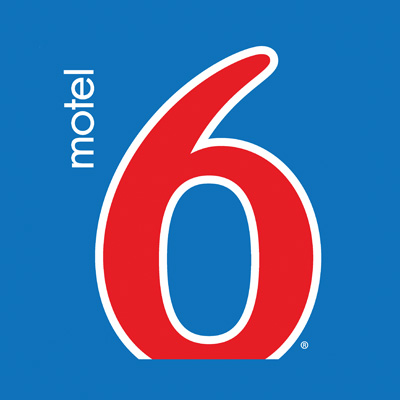 The budget end of the hotel market has rarely been known for its sense of style. And North American business Motel 6 was no exception – until now, that is.
The 1015-strong chain is ditching its deep blue carpets and rabid bedspreads in favour of single-colour chic and hardwood flooring.

It’s part of a trend, with other purveyors of low-cost accommodation upping their game, eschewing carpets and adopting wooden floors. But Motel 6’s revamp goes far beyond soft furnishings. Its $45 (£28) a night rooms are being completely remodelled, courtesy of Priestman Goode.

By designing the rooms to be longer and narrower, more can fit along a corridor, and the interior layout can be improved. Hence the ’wall’ that houses the all-important flat-screen TV, clothes storage and the main room light. The towels are rolled and stored in a series of circular holes on one side of the bathroom mirror.
As well as improving the look and functionality of the rooms, the new design reduces construction and materials costs, and makes them more durable and serviceable. The fit out – furniture, fixtures and equipment – is costing $4000 (£2500) a room, excluding labour.

This major revamp is being overseen by Jeffrey Palmer, who joined Motel 6 as senior vice-president of sales and marketing in 2007, and is jointly responsible for the brand’s strategic direction.

Palmer, who studied American Literature at Yale University, has more than 20 years’ experience as a senior-level executive in marketing, advertising and sales for Fortune 100 companies The Home Depot, Pep Boys and Circuit City.

With its headquarters in Addison, Texas, 48-year-old Motel 6 is a big chain owned by a bigger parent company, Accor Worldwide. Accor has more than 4100 hotels across 90 countries under brands such as Sofitel, Novotel, Mercure, Ibis and Etap Hotel. This last has already undergone a room redesign by Priestman Goode.

With such a big stable of properties, it’s no surprise that the Motel 6 process involved a number of focus groups – a dozen, in fact.

At this point, the London group was up against some home-grown competition: Powell Design Group from Orlando, Florida, GH2 Architects in Tulsa, Oklahoma, and Boka Powell from Dallas, Texas. However, this last group didn’t go away empty-handed, as it is the architect of the new-build Motel 6 in North Lake outside Dallas. 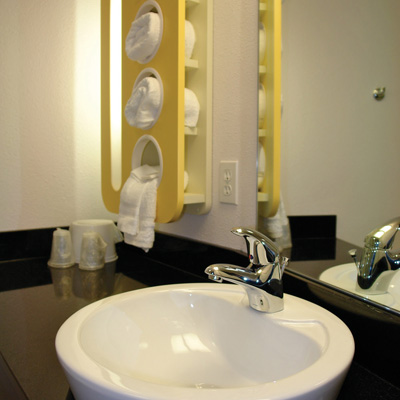 ’We have our own design team based in Texas – two architects and three graphic designers – but we went outside for the room design to find someone with true expertise in designing small spaces,’ Palmer explains. Priestman Goode’s history of working on airline cabins stood it in good stead.

Palmer explains that the consultancy’s styling and radical reuse of space has gone on to have an impact on the chain’s image. ’We’re very well known in the US, and the new design enabled us to reposition Motel 6 in consumers’ minds,’ he says.

The previous room design must have been considered bland, boring and spartan at best, but suddenly the focus groups were throwing up phrases like Euro chic, modern, up-to-date and stylish. ’We felt we could hit upon consumers who hadn’t used Motel 6 before,’ Palmer adds. In the US, Motel 6 is a byword for low-cost accommodation, though Palmer admits that, with the new positioning, ’We’d love to get a higher average daily rate.’

In fact, the redesign is about adding more value for guests, and in turn improving the occupancy rate, which stands at 68 per cent.

The new rooms are only part of Palmer’s story. He’s also overseen a reworking of the 15-year-old identity, along with internal and external signage. ’We wanted to signify to our guests that there was something different behind the doors,’ he says. Envision Group in California – which also revamped the chain’s website – applied the logo’s existing colours to a new graphic design. 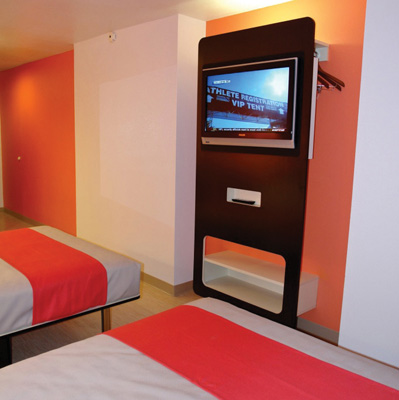 More than 70 locations have now been renovated, with more than 900 to go. When the big decisions over Motel 6’s future were being made, it took up almost 30 per cent of Palmer’s time. ’Now it’s down to nothing,’ he says, and Palmer is back to his day job of working on the development and execution of communications campaigns, the execution of media buying, and directing online initiatives, as well as seeking promotional partners and sponsorship opportunities. So he’s hardly putting his feet up.