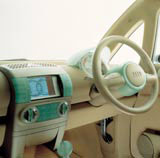 Looking at the cover of this book, you wonder whether Sony’s cute robot play-dogs could really be said to have changed our lives. Any more than, say, the battery-powered walking toy robots of yesteryear. True, they are smarter, they do more things, than earlier toys, but they represent evolution rather than revolution.

And then you enter the book, and find much more of the same. Evolutionary products. A slightly better car – the Audi A2, designed by Audi Design. A slightly better iron – the Tefal Avantis by Seymour Powell. A dinkier inhaler for asthmatics – the Handihaler by Kinneir D

All this is certainly Smart Design. The designers are good to excellent. The products show intelligence and flair. But no, they are not epoch-making, are not pivotal. They change our lives only in the small way that, for instance, self-adhesive stamps do. Stamps you don’t have to lick? How handy is that?

I don’t want to sound too dismissive, because this book is both instructive and entertaining. The process of design, from first rough sketches to finished product, is impressively demonstrated. And, it is good to find such a book by a real, involved practitioner rather than an outside commentator. Grinyer’s CV in product design (Fitch, Ideo, Tangerine) is more than respectable. And yet there is something missing. That something is any evidence of a genuinely radical idea.

The Titan Monotub washing machine, by Martin Myerscough and TKO, may or may not be a bigger step forward in laundry than Dyson’s Contrarotator. All I know is that it looks better than the jukebox-like Dyson offering. But surely Seymour Powell’s Infinium bagless vacuum cleaner for Rowenta is a classic me-too product, a response to the threat posed by Dyson’s original cyclonic innovation. Which is not to say it is a bad product – just that it’s so obviously following on, rather than leading.

Grinyer enthuses about the Nike Trax 250 watch by Rob Bruce, and the fact that Bruce’s team apparently have skateboards and wear baseball caps back to front. Come on, this is an ephemeral fashion item. A watch with an angled face and a perforated strap is just a watch. Whereas a baseball cap with a head-up time display for skateboarders – now, that really would be something.

TV as furniture? Yawn. Hollington Associates’ Kodak camera with a pop-up flash? Accomplished, but not world-beating – and old technology, anyway. And as for the E-pen, by Cambridge Consultants, why this skeuomorphic business of trying to make a hand-held e-mailing device resemble a dip-pen and inkwell? It’s plain bizarre. There’s even that old student standby, an egg-boiling device. What’s coming up next – a better mousetrap?

But this is what good designers do. There’s never that much in-the-bone innovation going on. Just a bit of fresh thinking underneath the styling, here and there. Which is enough, to be honest. That’s normal. This book is a celebration of design normalcy.

Smart Design: Products that change our lives by Clive Grinyer is published by RotoVision on 15 November, priced £27.50