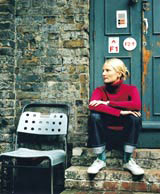 Job opportunities for the young crowd are few, and those not armed with self-publicity skills and an acquired business acumen have little chance of prosperity. Some success stories in Britain have centred on the phenomena of designer-makers, borne out of a lack of furniture patrons and a desire to see your work produced, regardless. Other fortunate case studies can be found thanks to the benevolence of foreign manufacturers such as the Italian Giulio Cappellini, who has made a name for himself for capturing talent when still at its embryonic stage.

Gitta Gschwendtner is one of the few, young, successful British-based designers whose life hasn’t been changed by Cappellini – although she is open to the possibility – and is reluctant to tread the path of self-production. She has always been aware of how ‘important it is to be seen by people,’ and has previously ‘produced things myself, via subcontractors and then promoting them in trade fairs’.

But she has often felt ‘restricted by what I could get from the UK manufacturers’ and produced far fewer items than maybe she should have, admitting that she is not really ‘a business woman, speculating and investing. I’d rather produce objects for the love of design, rather than trying to find a gap in the market. I find the whole process quite frustrating, especially if you visit good design retail stores such as Habitat and see that they are selling a coffee table for an amount of money I can’t even buy the timber for, because it’s produced in the Far East in high quantities.’ Gschwendtner does admit that knowing about self-production is good practice and although dismissive of her business talents, she is very commercially aware.

She is not shy of cold-calling companies, for example, asking if they might be interested in her consultancy. This is how she gained a contract with German manufacturer WMF to produce a series of stainless steel egg cups and trays. In 1998, just after graduating in furniture design at the Royal College of Art, she spent a period of work experience with furniture retailer Viaduct. Owner James Mair helped her as mentor with commercial advice on her college project, the Ball chair, and later offered her a solo exhibition of all the designs she had created during her period at the RCA.

Because Viaduct isn’t conventionally associated with exhibitions of students’ work, Gschwendtner felt she was being viewed by the public ‘as an established designer’. Since graduating, her work has always appeared at London’s 100% Design show, an event which she considers far more useful for weaving business contacts than the Milan International Furniture Fair, traditionally more of a press launch pad for young talent. In 1998, she established contracts at 100% Design with Italian manufacturer Horm to produce her Sliding Box shelving system, as well as German company Artificial for her Strangled Light. A year later, she e e presented Cast Iron Wedges, a multipurpose tile which functions either as a door stop, a fruit bowl or a paperweight, as well as a bean chair for Alma Home.

In 2000, after hearing that period furniture retailer Twentytwentyone was turning manufacturer, she approached it to produce her Lab Light. She then teamed up with fellow designer Fiona Davidson and proposed to DuPont Corian that it should ‘create an event at 100% Design that would both attract the press and have design value.’ Corian gave them complete trust and an open brief that resulted in five products, which exploited the malleable qualities of Corian. ‘The idea behind a design is far more important than the material,’ she says. ‘You take the material and you push it to the extreme.’

This year, Gschwendtner and Davidson have again tested their strength together via the European Council of Vinyl Manufacturers, a non-profit making body interested in promoting the versatility of PVC. Its 2001 stand, flocked in blue wallpaper, featured a series of quirky vases, fruit bowls and bookcases that to the undiscerning eye looked like ceramics. ‘Until you interact with them,’ says Gschwendtner, ‘then there is a second take and you discover how they change shape.’

Gschwendtner is interested in the potential of PVC beyond the ‘gimmickry, for example, of Inflate. I wanted to do something that looked sophisticated.’ Also on show at 100% Design was her collaboration with Mathmos’ Spin Project, for which Mathmos briefed her to design a light using spun aluminium. As a testament to her perseverance, this was one of the few times when a manufacturer approached her.

But it isn’t just at trade fairs that Gschwendtner’s work can be admired. Along with designer Carl Clerkin, she has resumed a relationship with Tom Dixon, who lectured her at college (‘we kept talking over the years and finally we got the call and a brief’), and they have designed a range of hallway furniture for Habitat.

Last year, via Louise Taylor at the Crafts Council, she created the exhibition design for David Redhead’s Industry of One exhibition and earlier this year, designed the Oxo/ Peugeot Design Awards exhibition. At the moment, she is working with Davidson on her first big interiors project, the design for ad agency Wieden & Kennedy London’s office (scheduled to open shortly). ‘The design philosophy there is to create chaos from order,’ explains Gschwendtner. ‘We wanted to emphasise the energy of the agency.’ Glass walls with bungee cords sit alongside anonymous glass display boxes. ‘We wanted to give them a blank canvas to fill with energy rather than imposing a wacky scheme.’ Having said that, the two are planning to introduce a greenhouse as a meeting room, something to keep the creative juices flowing.

For the future Gschwendtner hopes to work with even more enlightened manufacturers such as SCP. Whether she’s planning to make that call remains to be seen.