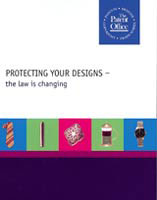 The Patent Office has warned designers hoping to exploit changes in design protection laws to ‘hold fire’, since the implementation date for changing the law has been put back to 9 December.

The 1999 European Directive is intended to harmonise design registration laws across Europe and was due to be incorporated into UK law by 28 October. However, the Government has been unable to find time to debate the directive in the light of recent events.

‘If you have been looking forward to exploiting the new law, please hold fire,’ says Philpott.

‘There are designers who are planning to lodge applications whose designs will get passed under new law, but will be thrown out under existing law,’ he adds.

Philpott says the Patent Office is aware of designers waiting to lodge applications. ’10 December is now the date designers should have a red ring around for lodging new applications,’ he says.

In order for the law to pass the legislation must first be debated by the Joint Committee on Statutory Instruments, the House of Lords and the House of Commons.

‘This is just rubber-stamping legislation already passed at European level. By setting a date for the 9 December we have allowed time for the debate to be put back,’ says Philpott.

The change to the law will represent new opportunities for UK designers to protect their creations, obtain money from licences and take action against copying.

Other changes include a 12month grace period for designers to register designs after they have been put in the public domain. Previously, if a design was launched before registration its designer was unable to register it.