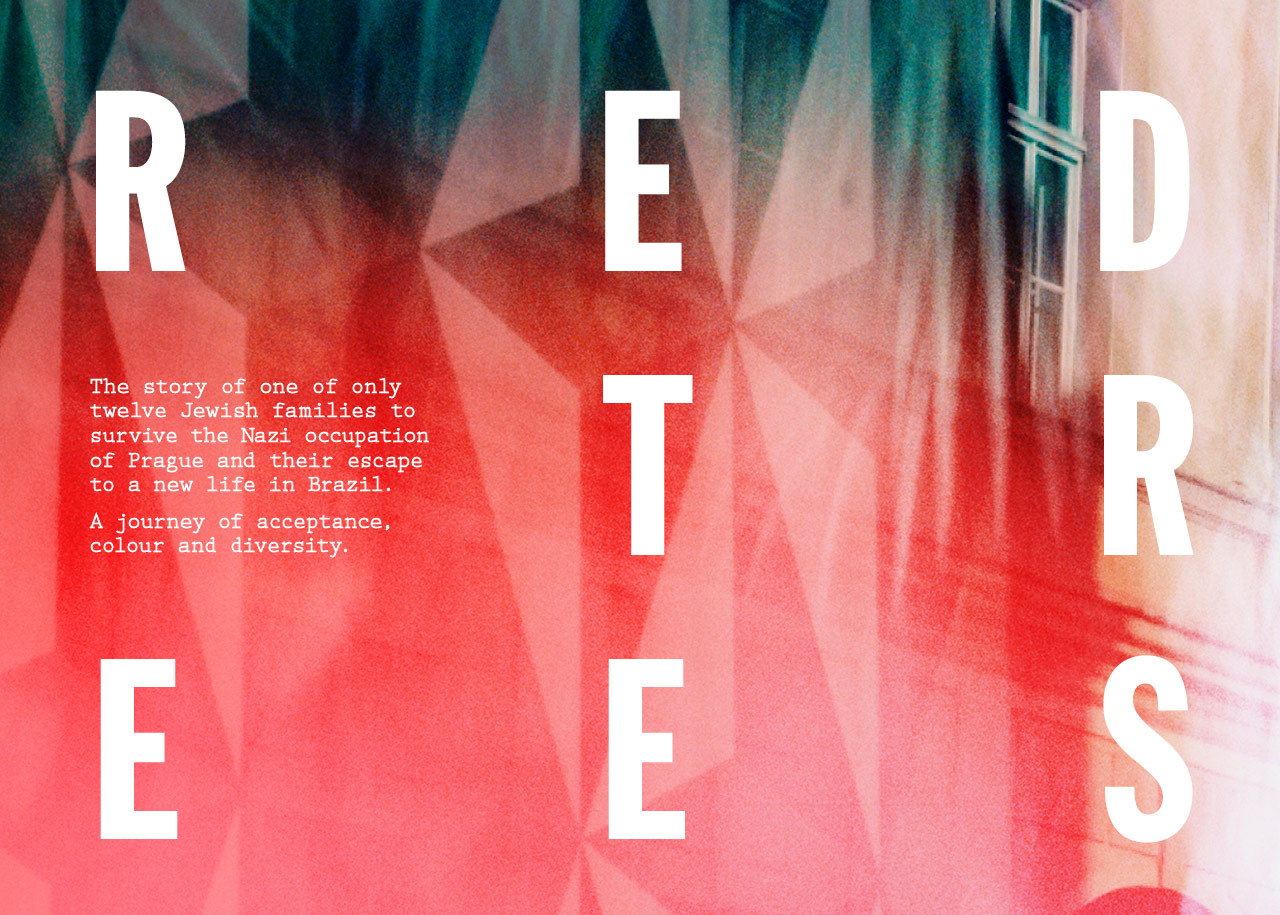 Pentagram partner Marina Willer is best known for her graphic design work for the likes of Tate, Southbank Centre and Oxfam. Although she has worked in film before, she has never attempted a full-length feature.

Now, the prolific designer has forayed into this realm with Red Trees, a 90-minute-long documentary on the life of her Jewish father Alfred, who escaped Nazi rule during World War Two.

Alfred fled the former Czechoslovakia with his parents, and his father was a coveted chemist who was one of the inventors of citric acid. The family escaped the fate of a concentration camp and were sent to Brazil under the pretence that Alfred’s father was conducting a research project into soya. They were one of 12 Jewish, Czech families to survive the Holocaust.

The touching documentary is a thought-provoking and poignant, real-life tale filmed in Prague, Czech Republic that aims to be both “personal and universal”, Willer says. It started life as a Kickstarter project in 2015. We speak to the Pentagram partner about why she decided to make Red Trees, and how her skills as a graphic designer played a part in its direction.

Design Week: Why did you decide to put this documentary together?

Marina Willer: For a long time, I’d had a desire to make a film about my father’s family, how they survived the war and ended up in Brazil but I had always been overwhelmed by the history and issues behind it. More recently I felt that the world has been going to such a bad place with so much xenophobia, hatred and mistreatment of refugees. I also felt my dad was getting much older, and it occurred to me that maybe this was an important story to be told – it’s very personal but also universal. So I got the courage and this is my humble attempt.

DW: How did you get into film-making?

MW: I’m not typically a film-maker, but it started at the Royal College of Art (RCA), where I did a masters (MA) in graphic design. I got to play and experiment a bit with moving image. Since then, I’ve been making short films and promotional ads for MTV and film festivals, but I’ve never really had a commercial ambition for film. I’ve also done work for architects and artists like Richard Rogers and Conrad Shawcross, and these are very much art films. I think corporate ads lose their soul a bit; I prefer things that are shown in museums and don’t have selling pressure, but are more used to communicate things. This is the first time I’ve done something more ambitious.

DW: How has being a graphic designer played into the film’s art direction? What did your skills bring to the process?

MW: I’ve always loved film, and I’m very interested in narrative and storytelling. I got very involved in the photography and cinematography of the film. It’s very image-led but also very words-led, the narration is very strong. It’s reduced to words and images in quite a minimalist way.

Being a graphic designer has helped. The precision of the images is so important with this type of narrative, to help you really take in the words. It’s like listening to a radio piece or reading a book. It’s different to films that have lots of action and things happening, this is more meditative and contemplative. It makes you think, which was the intention. We live in a digital world where people rush around and don’t stop to think much. Tough and tragic stories deserve time and space.

DW: Who did you work with and how did you choose your collaborators?

MW: The narrator Tim Pigott-Smith was was so kind and important to the whole project with his wonderful interpretation. Tragically, he died towards the end of the film. For cinematography, I chose César Charlone, who worked on City of God and The Constant Gardener and who likes my work, and also Jonathan Clabburn, whose work I adore and I’ve collaborated with before. Because we have worked so closely together, he understood my aesthetic, the minimalism and the need to make the film quiet.

DW: What were your favourite – and most difficult – parts of making the film?

MW: What was so important was what I learnt. I had to read so much and research, I learnt huge amounts about the history of former Czechoslovakia and World War Two. It was so tragic and devastating to find out what happened to the Czech people, and to get to know my dad and understand why he’s quite reserved. The war affected him, and he’s kept it all inside. He’s now very fragile with Parkinson’s disease, and this was a moving experience for him towards the end of his life. It felt like a reconciliation I had to make – it’s good to get to know your parents.

It was a real pleasure to see my children and dad together throughout the journey, learning from each other and becoming so politicised. All the little recordings with my kids and my dad are not rehearsed. They get on so well, which was really lovely for me.

The people we met and the factories we discovered in the Czech Republic were also incredible. These are places that don’t exist anymore because they were destroyed by war, which is heart-breaking – but on a personal level, my kids will always have this film to watch, which is priceless.

DW: What challenges did you come across?

MW: It’s very tough to make a feature film with so few resources. There was so much writing. I’m not English so people supported me on the script to make it more eloquent. We used my dad’s memoirs, so it’s all based on truth.

I also felt self-conscious, with my own voice and face in it – I didn’t want people to think that I thought my story was more important than anyone else’s. Originally, it was a short film and I didn’t appear in it at all, but people watched the trailer on Kickstarter and said my voice made it more interesting and personal, it made it come from the heart. At first I felt like I was showing off but after a while, I got over it.

MW: Sometimes I watch films and think it’s odd that the film-maker didn’t care about the image at all. Art direction isn’t about making it slick or overly decorated; the image has to serve a purpose, which is to tell a story. Sometimes that needs a rich, detailed image, and sometimes a simple and pure one.

At the same time, I think designers could really learn from film-makers in terms of storytelling, time and movement, which is so crucial to design. Design is not about pretty pictures, it’s also about telling a story and everything coming together.

DW: Do you have any advice for designers who want to step into film-making?

MW: I think they are different disciplines. Of course, nowadays design is more and more about moving image as well, and a passion for one thing can lead to another. But I do feel that it’s not automatic – I have a huge degree of respect for people who have studied and spent a long time learning the art of film-making. There are people, such as architect Peter Green, who become film-makers. If you want to learn on your own, it’s important to watch films, study them, get involved with cinemas – it’s a completely different route than animation and moving image. I was definitely scared, and I never planned to make a feature film – it just happened.

DW: Do you have plans for similar personal projects in the future?

MW: I have ideas for films but at the moment I’m a bit overwhelmed. I did it on a shoe-string; I felt like I was on the edge of surviving. It was almost a breakdown situation! I’m not thinking about it because film-making isn’t a career plan, it was just a story I wanted to tell. A film only feels like it’s necessary in my life if I have a burning desire to express an idea. Like anything with creativity, it needs to be something that’s really worth expressing. I do admire people who do one film after another; the amount of work and enthusiasm that goes into it is really incredible. Every image, word and bit of music has to be crafted with so much love and care. I can’t imagine doing that again. But maybe I will, if there’s another story that keeps me up at night.

Red Trees is currently playing at select theatres in the UK and US. The next UK showing is at the UK International Jewish Film Festival on 26 November at JW3 Hall, 341-351 Finchley Road, London NW3 6ET. For more info, head here. For the latest theatre listings in the US, head here.