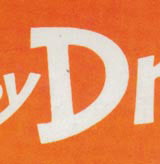 The premise was simple. Allocate a different letter of the alphabet to 26 top graphic designers and ask them to choose their favourite example of that particular character. They weren’t restricted to traditional fonts either – found or illustrated letterforms, or even 3D objects that created the shape of their letter, fell within the scope of the brief for this piece.

The results, as you might expect, were wonderfully varied. The most popular choice in various guises was Bodoni (b, f, r, s and z) , with sans serif fonts putting in a surprisingly poor showing (l).

Many designers were transported back to their childhoods, plumping for the typeface that first turned them on to graphic design (d, f, n and u), while other contributors simply seemed turned on (b and m).

Only one participant was ‘brave’ enough to choose his own typeface design (j), though two (g and x) chose type applied to their work. Among the most esoteric picks were a West African ladder (y), a still from a classic 1950s film (w), and a belt buckle (h).

It’s just a relief that we didn’t end up with a whole alphabet in Helvetica.

‘It’s big, bold, beautiful, brave and buxom. It’s bottoms and boobs. It can only be Bodoni Poster.’

‘Ever since it was designed by Oswald Cooper in 1921, Cooper Black has fallen in and out of favour as many times as I’ve had hot dinners. But to me, it evokes charm and personality from every single stroke, serif and counter.’

‘This d is from the cover of a Dr Seuss book I was given when I was three or four, which made me begin to realise what type was. It not only influenced the way I draw, but started an ongoing love affair with vintage type.’

‘The e from the Olivetti redesign by the multi-talented Walter Ballmer – this proves you can do great work as an in-house designer. It’s a beautifully round and fluid doctored sans, and works well in both 2D and 3D.’

‘Probably derived from Bodoni Bold Italic, this lower-case f used as part of the logo for HC Fawcett Caravan Centre first made me aware of graphic design. Designed by Ken Sharpe in 1970, the logo playfully turns the letterform into a vehicle for towing a caravan.’

‘A friend bought me a belt from HÃ©rmes as a present about three years ago, and it’s become one of my favourite items of clothing. I love it so much that I wear it pretty much day in, day out.’

‘There is one upper-case that can hold its own. Fifty years on, Paul Rand’s i is still instantly recognisable even without its cousins b and m.’

‘This j is from Manson, a typeface that I designed in 1992. Somehow it reminds me of a knife, maybe “exhibit A” in a court case that was used to kill someone. I am sure I wouldn’t have thought that if the typeface were called something else. A good example of how the name of a font can affect your perception of it.’

‘Take a paper square – any size. Fold in half horizontally. Fold top-right corner down to bottom edge. Fold bottom-left corner to top edge. Now fold in half vertically. That’s my favourite K.’

‘Taken out of context, this chunky lower-case Helvetica Neue 85 l becomes an abstr

act shape, a rectangle block even. It’s about as pared down as letterforms go and I love its minimalism.’

‘From the logo of the New Haven Railroad, designed by Herbert Matter in 1955. It’s a super-simple slab, all the strokes are the same weight. When I was really young I lived near a railway line in Mississippi and all the carriages had big slab-serif faces on them, probably so you could see them as they went past.’

‘My favourite o of all time is from a poster by Shigeo Fukuda, a remarkable Japanese designer-artist. It was produced in 1995 and marked the 50th anniversary of the A-bombs dropping on Hiroshima and Nagasaki.’

‘This p is from the 1930s Simpsons of Piccadilly logo, still on the facia of the Waterstones book store that occupies the old site. I don’t know who designed the identity (though I’m sure someone reading this does and will write in), and it may not be beautiful. But it has style and personality that is pretty good for a p.’

‘I love the playfulness of this q, designed in 1974 by Wim Crouwel for a catalogue to accompany an exhibition of the work of sculptor Claes Oldenberg at the Stedelijk Museum, Amsterdam. Crouwel’s type design experiments are all based on very rational grid systems and his Soft Alphabet is no exception.’

‘I have always liked Bodoni and the lower case r in particular, as it is basically a slab and a circle. However, I really like the r in Marmite in the morning and the r in red wine at night. The r I like least? It has to be the r in relegation, being a slightly nervous Leeds United fan.’

‘The forms of Miles Newlyn’s Missionary have intrinsic beauty. Maybe it’s my English eyes, staring too much at tombstones, or a desire for things to be a feast for the eyes to look upon. Sometimes it is good to ignore “fitness for purpose” and enjoy thinking of what possibilities remain to be explored and/or lie ahead.’

‘The u from the Uhu logo (Futura Extra Black, I think). It takes me back to afternoons at the kitchen table as a kid when I was making a mess in the name of creativity and having a crafty sniff when mum wasn’t looking.’

‘We are all born with one, but very few of us understand its effect.’

‘The most iconic w for me is the “Big W” in Stanley Kramer’s classic 1963 film It’s a Mad, Mad, Mad, Mad World. The plot revolves around a group of motorists racing around the US in search of a stash of stolen money buried under the “Big W”. It’s packed to the seams with the great comic actors of the day, and anything featuring arch-bounder Terry “You Absolute Shaaa” Thomas is good enough for me.’

‘My favourite is an x created by butting together the front and back covers of the book Multiplication, which we designed for the British Council in 2001.’

‘It’s a wood ladder, used by the Lobi people of Burkina Faso, West Africa, which happens to make the shape of a y. Someone sent me a postcard of it years ago, and it was so bizarre I kept it.’

‘It was tricky, and not everyone in our office agreed, but we finally came up with a lowercase Bodoni z. It’s elegant, proportional and timeless.’