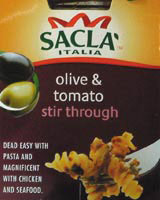 Italian sauce brand Sacla is relaunching Europe-wide from next month with a redesigned corporate marque and packaging by Ergo, in a project worth ‘over £100 000’ in fees to the group.

The first of the revamped packs will appear in the UK from early October, followed by a roll-out in the key markets of Italy, France and Germany a few weeks later.

According to Ergo creative partner Simon John, the group was briefed to consolidate the brand’s diverse packaging across Europe into a single solution and represent the brand’s Italian credentials more effectively.

‘Our main objectives were to bring the brand up to date, while at the same time reflecting its authenticity and heritage,’ says Sacla UK managing director Clare Blampied.

The group has redrawn the marque and added the word ‘Italia’ to Sacla’s long-established crown icon. ‘In certain countries, Sacla is misunderstood and not known as an Italian brand, so we had to address that,’ John says.

It has introduced a colour, ‘designed to represent the earthy, gastronomic qualities of Italian cuisine’, adds John. The terracotta/ copper colour nicknamed ‘terracopper’, will serve as the ‘primary colour’ across all packaging, applied to lids and labels.

‘The colour breaks the sector codes of red and green while expressing the brand’s core values. It is consistently understood by different cultures, even if they have their own ideas about traditional Italianness,’ John adds.

Ergo has also redesigned the labels for all of Sacla’s 35 product lines and created corporate brand guidelines.

The consultancy was appointed last October after two pitches. The first was a credentials presentation against several unnamed UK and European groups, the second, a paid, creative pitch against four rivals, according to John.