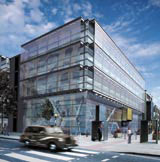 Hat-Trick will present initial designs next month for interior and exterior signage for the Salvation Army’s new-build international headquarters in London, due to open in October 2004, which could presage a new look for the 125-year-old welfare organisation.

The brief includes name generation and branding for a public cafÃ©, as well as graphics for an exhibition space. An identity revamp might be the next logical step as the building will project a far more contemporary image than that usually associated with the Salvation Army.

According to Hat-Trick director Jim Sutherland, the work ‘could lead to something else’ in identity terms.

While Hat-Trick is working for the Salvation Army’s international arm, Sutherland points out that regional divisions, including the UK, have a host of ‘crests and badges and flags’ but ‘no one tying it together’ as a brand.

The group will be concerned with finding a ‘balance’ between the Salvation Army’s traditional values and its new modern home (pictured), designed by architect Sheppard Robson, Sutherland adds.

‘The general public won’t be preached at [on entering the cafÃ©],’ he says. ‘But at the same time Salvation Army people have to feel comfortable too.’

It is understood that some within the organisation hope the new building will catalyse further change. A Salvation Army spokeswoman confirms unnamed groups have been approached, but adds ‘any discussions about the corporate image have been purely exploratory’ and talk of an imminent revamp is ‘premature’.

Hat-Trick was appointed to the project after a three-way final pitch earlier this month.