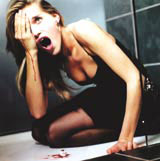 Odd is a good name for a design consultancy. Especially one whose off-the-wall credentials are reinforced by an ultra funky office in London’s Clerkenwell. Designed in the mad kitschy style made so popular by ad agency Mother (think 1970s flocked wallpaper and camper vans as meeting rooms), it acts a refreshing change from the current crop of minimalist, tidy office interiors.

Odd defines itself as a ’boutique agency’ specialising in identity and brand physicality – that’s the realisation of the brand via 3D environments to you and me. Set up about a year ago (it previously traded under the name of Cyan), it prides itself in a mixed bag of skills, including industrial design, architecture, print and digital design. The client list is impressive considering Odd’s short lifespan, and ranges from creating environments for the new PlayStation experience, mobile telephone pods for Siemens, work for new directory service 118 118 and private commissions for a luxury penthouse.

The aesthetic affinity to Mother and communications strategy and media planning agency Naked – with whom it shares the office – might have something to do with their ongoing collaborative relationship. ‘Odd, Naked and Mother are all independent companies,’ clarifies Nick Stickland, one of Odd’s founding partners (the other is Simon Glover). ‘However, they are each complimentary to one another. For example, on the Siemens Xelibri project, Naked was responsible for the strategy, Mother did the advertising campaign and Odd designed the pod as an ambient marketing device for nightclubs.’

Odd’s stroke of genius though is in its calling card. For first-time meetings it has devised a large suitcase that features a 3D representation of Odd’s structure. Open the lid and clients are faced with Oddville, a landscape complete with miniature cows, sheep, trucks, a tiny village and church, mountains and even a staircase that leads to a door into the skyline, in a moment reminiscent of Peter Weir’s Truman Show film. Each model is a symbol – for example, ‘cows carry clients’, explains Stickland and the ‘cows go into silos since Odd is not only about ideas and thinking, but also about process and managing all the production.’

The style of most of the group’s print work is – as with the office design – slightly over the top, in a cheeky kind of way. The project book includes ‘a free stuff section’ – as in projects that are not paid for, but allowing Odd unlimited creative freedom – and features a stylised rendering in silhouette of the group, making it look like 1980s boy band New Kids on the Block.

But it’s the thought process that makes Odd stand out from the pack. For example, for Dutch beer brand Desperado (owned by Heineken), Naked created the strategy for the campaign while Odd designed the identity. Stickland explains how Odd came up with the fantasy story line of a lizard man cult. ‘Lizard man is a wrestler who fights only after dark. It’s a cult and his followers party hard after dark every time he wins. But once he fought a matinee match and diedÃ­Ä¶ So the cult rose to their feet.’ Hence the Desperado campaign Dark after Dark, conceived as a mix of stickers, stencilling, badges and leaflets currently plastered all over Amsterdam and featuring the ghostly looking Lizard man image.

The fun bit is never far away with Odd, as the collaboration with Naked on the below-the-line 118 118 campaign also showed, where moustached men took over the street in an ice cream van, branded with low budget-feel graphics.

And Odd practices what it preaches, brainstorming while reclining on loungers in its faux-decked terrace space or in the dark red meeting room, customised with mad cuckoo clocks each displaying the time of essential global locations such as Ashby De La Zouch.

Ergo stirs up Sacla range for the European market