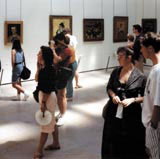 It’s official. The Tate is now collecting photography by photographers, not just photographs taken by artists. Its recent Cruel & Tender show was apparently a benchmark as photographers stormed this citadel of art. Unlike the rest of Europe and the US, large sections of our museum and gallery establishment have always been equivocal about acquiring and collecting photography. In the past few years things have changed dramatically. Suddenly London is awash with photography shows and festivals – curators and collectors rubbing shoulders, vying to discover the next Wolfgang Tillmans and thereby secure their own career trajectory.

David Campany has timed the publication of his new book, Art and Photography, to a tee. Yet he has not really answered the central question of why a photograph taken by an artist is considered to be art, but one taken by a photographer has to fight its corner in the art world. Photographers are seen as communicators, and commentators. Cultural workers even. Artists – nah. Not on this sceptred isle – unless, that is, they are like Juergen Teller and able to reposition themselves as angst-ridden artists.

Intention and motive have always been important factors, but how come a news photograph (like a Weegee) cannot be viewed as a piece of art and collected or valued accordingly. The image can transcend its original context and purpose – if the tastemakers and curators allow it to, that is, as we saw recently at The Photographers’ Gallery in the responses to the work of the Mexican news photographer Enrique Metinides.

So what does Campany offer us in the way of insights? An impressive volume in the Phaidon heavyweight (strengthen your coffee table legs) series, the book has clearly been well researched, cross-referenced and designed for maximum impact. Many of the names you would expect are here. Some you may never have encountered before. For this self-styled ‘comprehensive survey’ he has cast the net wide, but his list of artists, image-makers and photographers (whatever we should call ourselves these days) has a few notable exceptions – Martin Parr is one glaring omission.

How anyone could write a book about 40 years of art and photography and fail to include one of the leading exponents of his generation and one of photography’s relentless ambassadors is beyond belief. How famous (or obscure?) do you need to be to get on Campany’s list?

Conceptual artists from the 1960s and 1970s are well represented by the likes of John Hilliard and Victor Burgin. Nan Goldin, Barbara Kruger and Cindy Sherman are in the mix for the 1980s. The 1990s see the rise of the large format photo-artists – Hiroshi Sugimoto and Gregory Crewdson. Meanwhile, the edit is spiced up with documentary photographers such as Bill Owens (best known for his seminal 1973 self-published Suburbia) or more overtly political work from the photomontage artist Peter Kennard.

Using the language of the art historian, we are led through a scene-setting Survey essay, the major picture section Work, ending up with Documents, a set of essays, articles and interviews relating back to the images. Good solid stuff. We can argue with Campany’s list, but we should applaud the fact he has actually produced a book that will expose people to a vast array of images and make them think – once they get past some of the obscure and slightly inaccessible writing.

Perhaps the standout quote in the whole book is from Marcel Duchamp, writing to Alfred Steiglitz in 1922: ‘You know exactly how I feel about photography. I would like to see it make people despise painting until something else will make photography unbearable.’

Art and Photography, by David Campany is published by Phaidon, priced £45