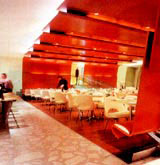 ‘For someone who makes a living out of designing restaurants, I am rather sceptical and feel an initial distrust of the “designer restaurants” label that many new places seem proud to acquire. When confronted with the new Brasserie, below Manhattan’s Ludwig Mies van der Rohe-designed Seagram building, all these prejudices fall apart. My apprehension was also supported by the fact that I had been a huge fan of its previous incarnation, designed by Philip Johnson in the 1960s. It was also a well known fact that, as well as being designed at the same time, the Brasserie’s all-day kitchen was next door to The Four Seasons – that ultimate power lunch restaurant – and we, the lesser powerful, always had an illusion that even when ordering a hamburger this was coming from the top chef neighbour,’ says Virgile.

The new Diller & Scofidio interior is, quite simply, stunning. Instead of taking the well trodden (and rather reactionary) route of French brasserie retro-fashion, the designers have created an exquisite, imaginative and innovative “cool” interior full of ideas which restore your faith in the belief that art and architecture can go hand in hand.

This starts at the entrance, where a surveillance video system provides a slow-motion, freeze-frame view of incoming punters walking down a catwalk access, giving them a 15-minute chance of a lifetime for New York fame and glory. This is no design gimmick, but well considered interior architecture. Echoing Alvar Aalto, a second skin wooden membrane creates a series of wave-like forms and a shell that envelopes the main part of the eating area.

The bar is the piÃ¨ce de rÃ©sistance. The simple detail, whereby bottles are displayed horizontally within back lit cabinets of translucent glass, and the extraordinary use of materials such as padded caramel-like, medical gel stools create a memorable effect. Booths are separated by full-height upholstered partitions positioned at an awkward angle to great theatrical impact, while the use of Eero Saarinen chairs clearly evokes the roots of the Brasserie’s former life.

But it is New York life, people, celebrities, party-goers, “fashionistas”, politicians and simple customers in search of an honest meal who make the place one to enjoy frequently, and even make boring business conversations seem an attractive affair. I give it ten out of ten,’ says Virgile.