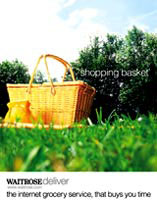 Williams Murray Hamm was asked to create a quick turnaround, through-the-line campaign for Waitrose Direct, the on-line shopping service from the chichi supermarket chain. As well as the more expected in-store material, leaflets and six-sheet posters, it included a series of 48-sheet posters, which will be trialled, imminently, in four sites outside London.

The posters are based around the simple premise that people would rather be enjoying themselves than doing battle in a busy supermarket. They show people in various leisure-time situations, together with two-word puns based around the word ‘shopping’. There’s a woman in the bath with tea-bags over her eyes accompanied by the words ‘shopping bags’; a man taking a shot on the golf course with the words ‘shopping trolley’; people at the cinema with ‘shopping aisle’, and so on. They are all signed off with the line ‘the Internet shopping service that buys you time’, and use the classic poster synergy of words and image.

‘We had worked with Waitrose before on a graphics-related job,’ explains WMH creative director Garrick Hamm. ‘The client was confident that we really understood the brand and could apply an idea across a wide range of material.’ Hamm maintains that designers are adept at communicating visually a given tone of voice, while advertisers, perhaps, think more strategically and longer term.

The Waitrose posters demanded a sophisticated, understated feel – ‘Waitrose wouldn’t have wanted a bag of shopping with a [computer] mouse in it,’ says Hamm, archly. The images were critical and needed to convey a sense of relaxation and calm. All of the shots were supplied by photolibraries, apart from the woman in the bath, who was photographed specially for the campaign. ‘[The posters] are aimed at intelligent, professional people who don’t like to be sold to,’ says Hamm. ‘They are deliberately simple, not over-designed, with a lot of negative space and small type.’

Given the chance, Hamm wants to take on similar projects in the future. ‘We don’t want to become an ad agency,’ he says, ‘but we are very interested in ideas-based communication.’

Microdot scores for rugby board