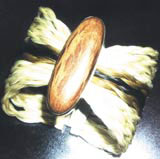 A Touch of Finland, from 5 March until 4 May, includes the works of 12 Finnish craft artists who capture the essence of their country’s natural forms.

From 27 February until 27 March, A Century of Chairs charts the design history of the chair through the classic examples in its collection of chairs from the 20th and 21st century.

The first major UK retrospective exhibition of Pop artist Roy Lichtenstein, who gained fame in the 1960s with his paintings based on cartoon strips and characters, is on show from 26 February-16 May.

Venue: Hayward Gallery, South Bank Centre, Royal Festival Hall, London SE1. In celebration of the tenth anniversary of the Fairtrade Mark, photographers Zed Nelson and Karen Robinson were commissioned by the Fairtrade Foundation to record images of Fairtrade producers in the developing world. Their portraits are brought together in A Taste for Life from 27 February until 14 March.