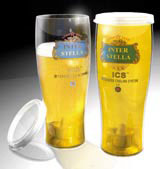 SLA, SLS, LOM, RIM, CNC, PMC, FDM, SGC, 3DP: the acronym-infested world of rapid prototyping is bewildering and it is just one side effect of the increasing prevalence of such technologies versus ‘traditional’ model-making techniques. Arguments rage about the benefits of both. Adherents to the traditional craft believe rapid prototyping has limitations, particularly concerning accuracy and aesthetic appeal. Followers of newer techniques believe it is faster and more productive. Can the two co-exist?

RP is a group of technologies that can automatically construct physical models from Computer Aided Design data. It is an ‘additive’ forming process, consisting of a series of layers – about 0.01mm to 0.7mm thick – of paper, wax or plastic, to create a solid object.

A Bruce or a Jimmy, on the other hand, is a skilled craftsman who, with differing degrees of input data, can create a beautiful finished model. They are increasingly difficult to find, as the current burgeoning British film industry has hijacked many away from the technical side of model-making to bask in freeform tasks commissioned for the big screen.

Essentially, whether wowing the client or quickly proving a principle, RP modelling techniques can sit comfortably alongside the traditional approach which in itself, with use of new technology, has developed enormously.

Like many aspects of design, the industry of models and model-making has splintered off into diverse sub-groups and specialisms over the past decade. Another specialist solution for saving time on models seems to arrive every two minutes. In a time-pressured environment, it is all too easy for product designers to stick with tried and tested routes, as on many jobs there simply isn’t the time to risk something going wrong. The pressure to revert to proven methods is overwhelming and can lead to a slower uptake of new processes.

RP requires the production of comprehensive 3D data on the various CAD systems that exist. This data is converted to stereo lithography format, the first and consequently adopted standard of the RP industry, and this file is then sliced into the cross sectional layers required for the model. As a result of this layering process, the completed objects have a stepped finish and, although this problem can be minimised, it remains the telltale sign of an RP model. Hand finishing of this stepped surface to create a surface that is fit to spray and present to clients often leads to a ‘fudged’ model that has none of the right surfaces or proportions and is compromised visually.

But RP is technically advanced and will continue to develop to pinpoint the accuracy in the vertical direction of the model – effectively decreasing the size of the steps. It delivers dimensionally accurate models and allows the checking of details of manufacture. Once the initial CAD work is completed, RP is a cost-effective way of prototyping and developing cheaply. But it doesn’t work across metal.

RP forms the basis of rapid tooling techniques such as vacuum, sand or investment casting, where the RP parts are used as patterns for making moulds and dies, and also forms the basis of the holy grail of the manufacturing industry – ‘rapid manufacturing’. This is defined as the automated production of saleable products direct from CAD data.

RP is an excellent and useable process that greatly aids the process to quicker manufacture, but it has no soul. Design is about practicality, but it is also about emotion.

Very often a model is a vital requirement in the selling of a design to a company. The ability to present to the client a beautiful model in the relevant colours, materials and finishes – a representation of the final product that is not necessarily dimensionally accurate but good enough for the stage you are at in the development process – can make or break a project. These models are sometimes made from 3D data, sometimes 2D and, using a combination of CNC machining and hand making and some interpretation, are fully reliant on the finishing and detailing skills of Bruce or Jimmy.

Models like this cost money (I always judge them in terms of small family cars) but provide the focus and guide for project teams, can be used by the client for photography pack shots and given to sales forces and potential customers to provide a flavour of what is coming.

Both techniques are vital and have their appropriate place in the design process, but it is easy to confuse what each may be trying to achieve. A prototype is not a model and a model is not always intended to be the finished article, rather a significant step on the way to a closer definition of the product. It is used to satisfy the aesthetic demands of the project for both client and designer.

RP and 3D CAD techniques are vital on the road to manufacture, providing a global means of transferring data to a standard that enhances understanding of requirements, particularly where language is a factor. For example, RP enables a manufacturer in China to produce a cost effective prototype, but the process can still be time consuming and frustrating.

But the ability to create something 95 per cent of the way there from minimal data in a relatively short time – something that excites and stimulates the client, will always have a role to play. As with all things, the further development of CAD techniques will gradually encroach on process, leading to virtual modelling. But long may Bruce or Jimmy ply their trade.