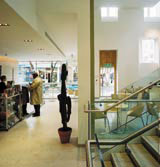 Ilse Crawford’s stark white interiors are a fitting tribute to The Hospital’s medical past. The multimedia cultural venue, located at the less touristy end of London’s Covent Garden, is a state-of-the-art facility incorporating recording studios, production rooms, a members’ club, a cafÃ©/ bar and a gallery and stands on the site of several hospitals, most recently St Paul’s, which was still functioning in the early 1960s. Crawford seems to have emulated the clinicism of hospitals with varying success.

Billed as a ‘Groucho Club for the music industry’ and founded by ex-Eurythmics star Dave Stewart and Microsoft co-founder Paul Allen, The Hospital’s second show is an apt parade of the great and good of American pop music shot by – who else? – Annie Leibovitz.

American Music was born out of Leibovitz’s desire to return to the roots of American popular music. For four years she travelled the US photographing the stars of blues, country, jazz, rock or rap who have helped shape the country’s musical development. Older icons featuring in Leibovitz’s odyssey include: Johnny Cash, RL Burnside, Aretha Franklin, Max Roach, Dolly Parton, Dr John and a striking shot of the Stax Records Reunion, the Memphis-based label founded in 1960 by Jim Stewart and his sister Estelle Axton. Younger artists who Leibovitz deemed worthy of inclusion alongside these masters include John Frusciante, Beck, Ryan Adams, Missy Elliot, Norah Jones, Dr Dre and Eminem.

The work has what you expect of Leibovitz – wit, richness and detail, such as the close-up of Willie Nelson’s wonderfully lined face, a serious study of Bruce Springsteen at work, a circus-style shot of The White Stripes and an affectionate portrait of Parton. Leibovitz seems to revel in photographing serious, dare I say more worthy, subjects rather than her usual Hollywood line-up.

The gallery and exhibition, designed by Theis and Khan, does nothing to enhance the work on show. The harsh strip lighting illuminating each photograph – which wouldn’t look out of place in one of the site’s former operating theatres – is distracting. The reflection in the glass is so bright you find yourself checking your hair rather than focusing on the photographs. Each shot is lit from below by a strip light, and you have to stand wide of each image, particularly the darker compositions, to see them properly. Coupled with low ceilings, the space is a touch too clinical even for The Hospital.

Outside, the foyer cafÃ© was attracting passing trade even from people clearly not interested in the exhibition itself. The triple-height space was welcome relief from the somewhat claustrophobic gallery and let in an abundance of natural light. It would make a great party venue. Interbrand’s cuddly, cartoonish branding was inconspicuous, which was a shame because it nicely off-sets the coldness of the space.

Step outside and you can see the original front of the building, beautifully cleaned and restored. The Hospital is bound to attract the creative industries through its polished doors, not least because of its good location, facilities and Stewart’s no doubt excellent contacts. But as an exhibition venue, it falls seriously short.

Toolkit for Department for Education and Skills