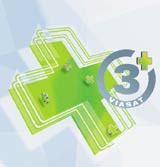 English & Pockett has revamped the brand identity for Danish television channel TV3+, as it moves to attract a young, predominantly male audience.

TV3+, which is part of Danish broadcaster Viasat’s family of satellite channels, bills itself as a general entertainment option, presenting a mix of films and sports.

He adds that the consultancy was briefed to ‘make TV3+ come alive’. The group’s creative solution, he says, involved the creation of a brightly-coloured, animated ‘character’ that moves around a ‘grey and white world’.