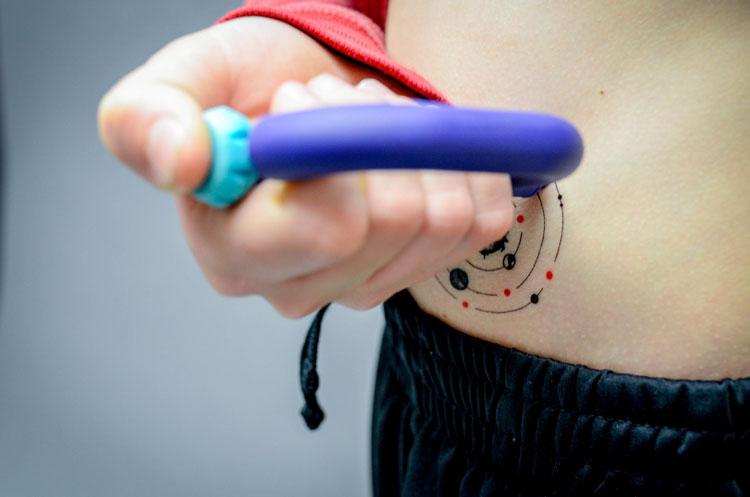 For those living with type one diabetes, injecting yourself is a daily occurrence. The chronic disease, which is caused when a person cannot produce their own insulin, can be a life-altering condition, with patients having to inject themselves several times a day, check their blood glucose levels regularly and make big changes to their diets, exercise regime and general lifestyle.

The condition is common in children. According to charity JDRF (Juvenile Diabetes Research Foundation), around 29,000 children in the UK live with type one diabetes, and the number of five-year-olds with the disease goes up by 5% every year.

Having to manually inject insulin into your body is part of the treatment for the disease, and what’s more, the JDRF estimates that a person with type one diabetes will have around 65,000 injections in their lifetime. 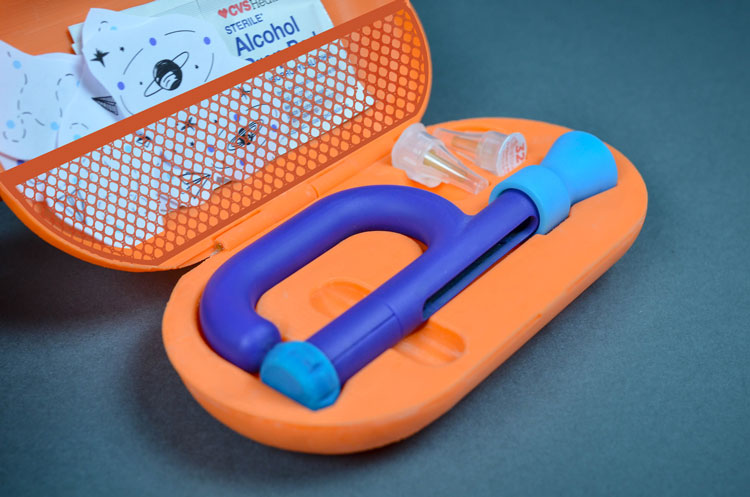 Renata Souza, a 24-year-old product design graduate from Parsons School of Design in New York, has come up with a prototype for a new, “fun and intuitive” insulin pen for children, which aims to reduce the stigma, embarrassment and pain that can result from having to inject several times a day.

Discussed at this year’s Design Indaba in Cape Town, South Africa, Thomy is a colourful insulin-injecting kit inspired by Souza’s six-year-old nephew Thomás, who was recently diagnosed with type one diabetes. The designer worked with doctors, patients and other designers on the prototype, and conducted research into type one diabetes.

It consists of a chunky, colourful insulin pen, with a big handle that aims to be better-suited to children’s hands and easier for them to hold, a shorter needle to make it easier to reach and thermochromatic plastic at the top that changes colour to indicate when someone is finished administering insulin and can release the needle. The changing colour also aims to add a bit of excitement, distraction and fun to the whole process.

As well as making injecting a less painful task, the kit looks to teach kids the more difficult stuff about multiple injections and help them be “independent”, Souza tells Design Week.

One crucial part of self-injecting, is the need to constantly change injection points on the body – patients need to change the point in their skin at which they inject to avoid a build-up of fat under the skin in one area, known as lipodystrophy. Patients are advised to inject at different points across certain, fattier areas in the body, such as the arm, abdomen and thigh. 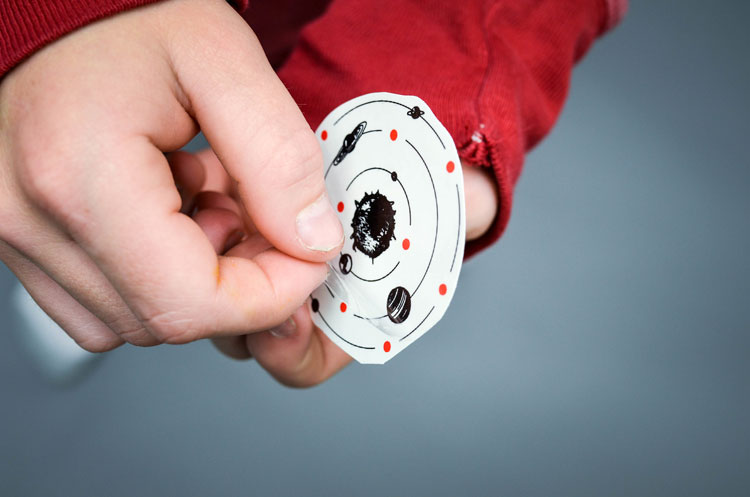 But how can a young child be sure they have always remembered where their last injection point was? Souza’s kit comes with a series of rub-on, temporary, “non-toxic” tattoos, which show rotating needle injection points, incorporated into different graphic designs such as a solar system. The tattoo is black, with just the injection points in colour. 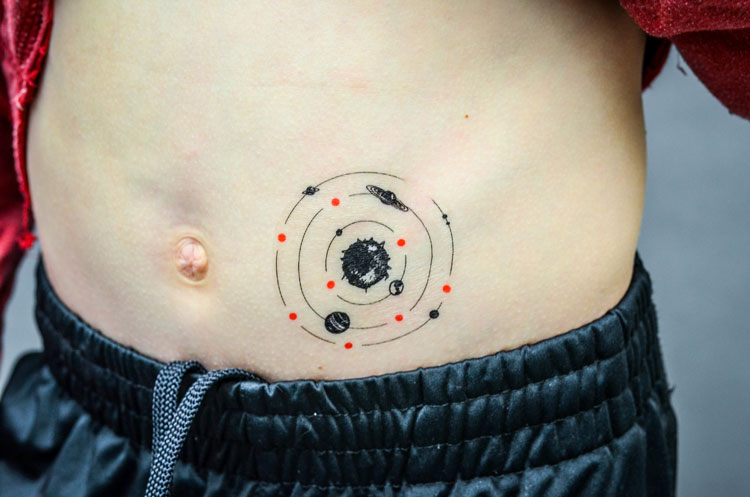 Just before injecting into a point, a child or their parent can rub the coloured dye spot off with an alcohol wipe, and travel clockwise when a new injection is needed. This shows exactly where has been injected previously, and has the added benefit of cleaning the area before an injection, which is also recommended.

Souza worked with doctors to develop the pattern for the tattoo, which can now go on to be applied as a template to various designs. She hopes to commission various illustrators in the future to create designs based on this strict pattern.

“Not only is this something fun so will make them want to inject themselves, but it will teach them to manage their condition and be independent from a young age,” says Souza. “The black and colour pattern combination is simple, straightforward and intuitive. It could also have psychological benefits and make them happy. Many kids might be ashamed of their conditions and not want their friends to know – this could change that.” 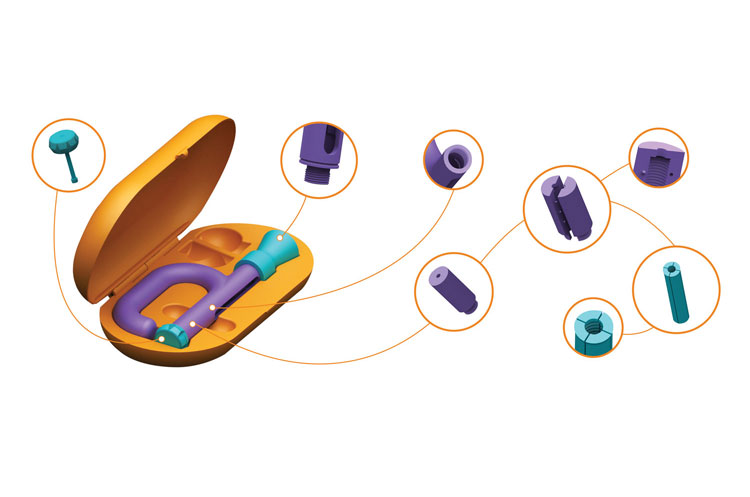 The Thomy kit, which Souza has preliminarily priced at around $32 (£23), aims to improve the current insulin pen market, currently priced between $25-30 (£18-22), which Souza says is drab, cold and clinical and marketed entirely at adults, despite the high number of children with the condition.

“There have been great developments in science and mechanisms but humanising products is really lacking in the medical field,” she says. “The existing pens are robotics and un-natural. If people like the way something looks and work, and they can identify with it, research has shown this increases patient compliance and so aids condition management or recovery.” 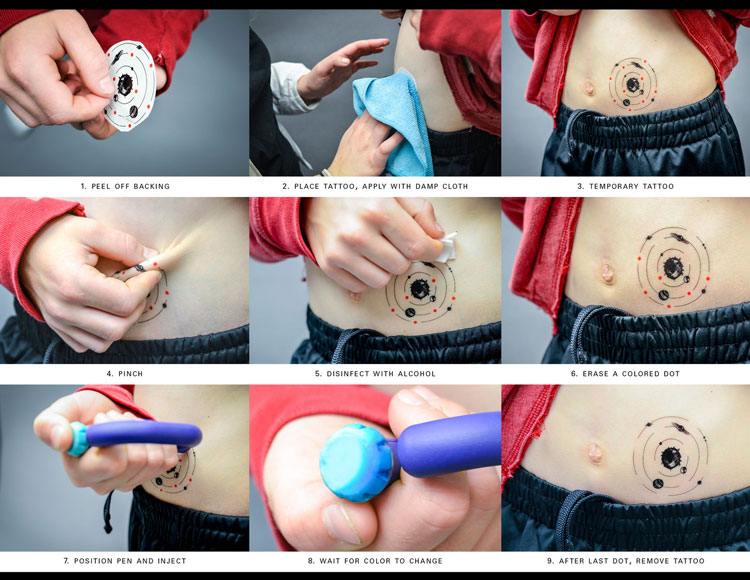 An alternative to the expensive insulin pump

“The insulin pump, which improves on the insulin pen, is a good example of great progression in mechanisms, but on the other hand, it’s a lot more expensive than a pen,” she adds.

Thomy is currently a prototype project, and Souza is seeking a company to partner with to manufacture and sell the product globally. For more information, head to the Thomy site.

Design Indaba took place 21-23 February 2018 at the Artscape in Cape Town, South Africa. For more information on the festival and this year’s speakers, head here, and look out for Design Week’s coverage on the event over the next two weeks.