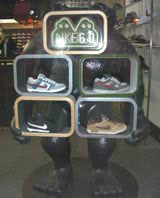 Nike has finally started a dedicated skate shoe line, but will it ever rival the underground brands that have dominated the market for a generation? John Cooper rates Nke6.0’s chances

Nike may be an indomitable force in high-profile team sports, where its sponsored athletes are household names, but, when it comes to dynamic adrenalin sports such as skateboarding, BMX and snowboarding, the global behemoth starts to show its bulk. For decades, these sports have been dominated by small, innovative companies, dedicated to providing cutting-edge, functional products that can withstand the punishing demands of the top athletes. Then there are the companies established by the stars of these sports – think Tony Hawk for skateboarding or Mat Hoffman and Jay Miron for BMX – that stage contests that showcase the sports in all their heart-stopping drama, rather than pander to the suits at sports cable channels.

Now the sleeping giant has finally awoken and realised it is missing out on a lucrative subculture. Nke6.0 is Nike’s new venture into the action sports world and the shoes may look the part, but the company’s approach will hardly appeal to the hard core exponents who drive these sports. Their response will be, why didn’t Nike start making skate shoes 20 years ago? Nke6.0 may be nurturing the grass roots – its roster of athletes is made up entirely of what appears to be pre-pubescent rippers – but there is a whole generation of action sports addicts out there who were ignored by mainstream sport brands, so they started their own brands, creating kit that was tailor-made for their sport, keeping their ear to the underground to find out what people wanted. Now, along comes Nike with its half-arsed approach – why didn’t it go the whole hog and back truly world class talent, rather than the stars of tomorrow? Nike has previously made successful forays into quirkier markets – fast and furious all-mountain snowboard legend Barrett Christy has ridden for the All Conditions Gear outdoor range and even designed a cross trainer for the brand.

In contrast, Nike is acutely touchy about the Nke6.0 brand, not wishing to co-operate with Design Week, as, according to its public relations company, explicitly focusing on the design of the range conflicts with its ‘authenticity’ and a carefully masterminded media and PR strategy of only allowing specialist ‘extreme’ sports magazines access to official images. Nike’s worries about authenticity are certainly well-founded, but it is the way the multinational has developed the sub-brand that is to blame; trying too hard to be ‘extreme’ is certainly not going to help its cause.

Who knows? In a few years, Nike’s youth-nurturing strategy may pay off as Nke6.0’s team comes of age, but, in counter-cultures where a company’s image is only as good as its best sponsored rider, and where competing brands have a rich history of pushing progression, Nke6.0 looks like it might have growing pains.

UK designers must stay ahead of world competitors