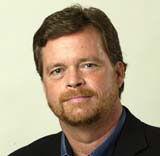 The anointing of Mark Parker as Nike’s chief executive this week puts a product designer at the helm of one of the world’s biggest companies.

His promotion, following the resignation of Nike chief executive William Perez last Friday, makes Parker (pictured) one of the most senior design supremos in the commercial world. Last year, Nike was listed 173rd in the Fortune 500, which ranks US businesses by revenue.

Parker says that, though his leadership style will be rather different, his strategic direction will be much the same as that of his predecessor, for the present time. He will continue to pursue Nike’s five areas of focus for the business, he says, namely: its product performance and innovation pipeline; building connections with consumers through its brands; being ‘disciplined’ in harnessing growth businesses; being committed to achieving long-term financial goals; and leveraging the Nike portfolio to maximise growth.

‘I will be spending more time on the Nike portfolio. Denson now has sole responsibility for the Nike brand,’ Parker says.

The immediate challenge for Parker, going forward, appears to be more about improving the efficiency of Nike’s business operations than driving new product development. Parker, a proven innovator, describes Nike’s product pipeline as ‘about as strong as it’s ever been in 26 years’. However, Knight describes Nike as ‘currently operating at 80 per cent efficiency’.

Knight, who stepped down from the chief executive role in December 2004, surprised analysts by appointing the outsider William Perez from SC Johnson, thus sidestepping Parker and Denson. He now admits he had ‘some misgivings’ about Perez, and describes Perez’s leap from packaged goods to performance sportswear as just ‘too great’.

While Perez ‘failed to get his arms around the company’, according to Knight, he adds that Parker will be ‘the best CEO that Nike ever had’.

Knight also firmly denied the rumour that Nike was looking to buy Puma, at a time when rivals Adidas-Salomon and Reebok International are set to merge.

US apparel companies by revenue

Heineken gets on the wagon

Partnership business models do pay off