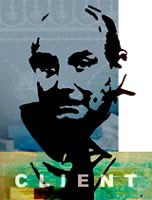 Getfrank has created the visual identity, including title sequences, logo and branding, for a TV war game show called Mercenaries that launches next week.

The consultancy did not pitch for the job, but was approached last year by TV producer The Bridge. Getfrank’s creative director Andrew Seel has worked with The Bridge managing director Tony Steyger in the past.

The Bridge would not reveal the budget, but said it would not allow the group to create visuals for every element of the Mercenaries design job, such as the website.

The show has two teams tackling missions using gaming software and learning hacking techniques in a military bunker-style setting. The 15 episodes are being broadcast on Flextech’s men’s cable channel Bravo.