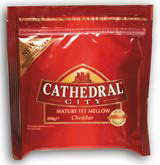 Springetts is rebranding Dairy Crest’s cheddar cheese brand Cathedral City, as the company prepares to ramp up investment in the brand and launch a host of products.

The group has redesigned the entire Cathedral City portfolio, including deli cheese, snack packs and single portions, in a project believed to be worth in the region of £50 000 in fees. The redesigned packaging will appear in supermarkets from 30 June with new products following in August.

Dairy Crest is seeking to grow its market share, which stands at 20 per cent, and maintain a competitive advantage over rival brands, says Dairy Crest marketing director David Turner.

‘We want to grow Cathedral City into a £100m brand in the next three years, and position it as an everyday special product. The packaging plays an important role in that,’ he says.

The company is introducing what it claims is the first re-closable cheese packaging.

‘Cheese packaging is difficult to get into, and then usually thrown away. We wanted to make the packaging more consumer friendly,’ Turner comments. Springetts worked with a US manufacturer on the resealable design, he adds.

The group has introduced a ‘mitre’ to the packaging as a brand icon, continuing the ecclesiastical theme, says Springetts senior designer Nicole Blight.

‘We have inverted the Cathedral banner to make it appear more positive. It was previously turning down at the corners,’ Blight says.

The cathedral marque itself has been ‘de-cluttered’ and the entire packaging modernised with the addition of white instead of cream as the contrasting colour to burgundy, she adds.

Springetts won the work without a pitch from its position as lead packaging design consultancy on Dairy Crest’s roster.