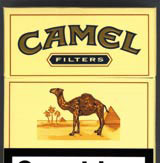 Tobacco giant Japan Tobacco is working behind closed doors with a group of international designers to rethink the branding for Camel cigarettes, Design Week can exclusively reveal.

A launch is scheduled for later this summer and is being undertaken by the company’s JT International operating division. Huddersfield-based design group Attik is understood to be leading the project after being appointed following a three-way pitch last summer.

JT International has cherry-picked a team of nine designers and artists from around the world, including New York group Vault49, to collaborate on revised designs for Camel. The work is expected to create more ambient ways of communicating with consumers and improve cohesiveness in the Camel brand across global territories and markets outside the US.

The specific details of the work are being kept guarded until an international launch in July, but JTI is thought to have produced revised brand guidelines for Camel, updating its visual language, typography, illustrations, library of photographic images and colour palettes. The iconic camel logo has also been refreshed with new applications.

Cigarette packs will not be redesigned but may feature some of the more decorative illustrations produced by the artists and designers in the future.

The branding will run across campaign and marketing activity as well as affiliated Camel collateral, such as vending machines, retail outlets, point-of-sale items, bars and sponsored events, but it will not launch in the US.

JTI is the world’s third largest tobacco manufacturer with more than 90 brands in 120 countries, including Camel, Winston and Salem.