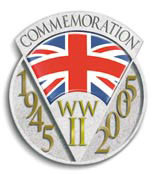 Loewy has created an identity for the official 60th anniversary commemorations marking the end of World War II, which will be taking place on 10 July. The design shows a Union Jack at full mast, unfurling to form a ‘V’ for victory, flanked by 1945 and 2005 in gold lettering, with WW II underneath. The logo will be used on commemorative objects such as plates, lapel badges for war veterans and a £2 coin that will be available in Jersey. It will also feature on a website. Loewy was commissioned by the Veterans Agency, part of the Ministry of Defence.