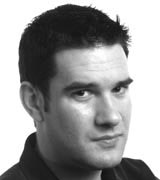 A review of the Transport for London design roster will commence this September, with ten to 12 consultancies expected to be selected for the three-year contract (see News Analysis, page 9).

Consultancies on the design roster are employed across the range of TfL projects, including modernisations of Tube and rail stations, product development and branding and graphics. The company is expected to spend £5m on design services in this financial year.

TfL head of design Innes Ferguson (pictured right) says the changes are in response to an increase in cross-discipline projects. He is considering arranging the roster under just two, broad areas, losing the current categories of graphics and identity, product design and architecture and interiors.

The roster is expected to be smaller than the present 35-strong list. ‘We would like to settle with just five or six groups in perhaps two areas – 2D and 3D – with electronic interface skills a prerequisite across both,’ says Ferguson.

The process will commence with a tender in the Official Journal of the European Union in September and the new frameworks must be in place by 1 April 2006. ‘The difficulty is trying to objectively cut down applicants, while not stipulating they have experience with a UK public transport authority,’ adds Ferguson.