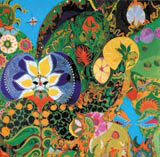 To hallucinate means to ‘go astray’, and some of this work goes way, way astray. It screams with the frenetic intensity that you associate with a state where drugs have removed all sense of taste and judgement. Most of psychedelic art retreats from the world we know, and either draws us away into a reassuring utopia populated by pixies and flaxen-haired maidens, or into the kaleidoscopic world of drug-induced visions.

And drug-induced visions are, as we know, intensely moving for the drug-taker, and meaningless for anyone else.

The hugely significant work of the Push Pin Studio – headed by the giants Seymour Chwast and Milton Glaser – is represented in this exhibition by a single poster. The group was among the first to resurrect Victoriana, primitive and folk art, and the Art Nouveau style – all the underpinnings of hippy art – doing so as early as the mid-1950s. Nor is the extraordinary art of the Swiss designer/illustrator Hans Hillmann here – he of the unforgettable fantasy The Yellow Submarine with its Beatles soundtrack – frightening, funny, amazingly visually inventive, it represents the freewheeling effects of drugs controlled by an imagination that all of us can respond to.

But then this is the Tate, and design can’t be art.