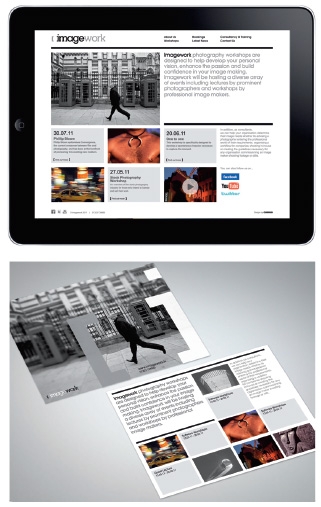 Curious has created the branding for new company Imagework, which runs photography and video workshops.

Imagework, which will be based in London’s Westbourne Studios, will run events such as workshops and lectures on subjects including stock photography, shooting video and professional practice.

Curious started work on the project in November 2010, having worked with the founder of Imagework on a number of projects, according to Gary Smith, partner at the consultancy.

Curious has developed an identity based around the image-capture symbol that the viewer sees when looking through a camera. This icon can be used as part of the Imagework name or as a standalone brand marque.

Smith says the branding uses a ’neutral’ colour scheme, so that in applications such as the website and printed collateral ’the image is the focal point in the hierarchy’.

Curious has also created a website for the company as well as business stationery and promotional collateral.

Imagework is set to move into Westbourne Studios in July and has planned its first workshop, with film-maker Philip Bloom.

Smith says Curious hopes to continue to work with Imagework to develop the brand and work up further collateral, which could include books.