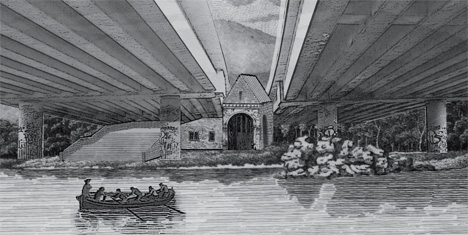 The Create festival, which showcases art and design in east London in the run-up to next year’s Olympics, has unveiled its 2011 programme.

The Create festival is now in its fourth year as an annual cultural programme co-ordinated across London’s five Olympic host boroughs.

This year the event which will run from 24 June to 25 July has a significant focus on public art, and also built environment design, alongside other art, music, dance and theatre.

The 80-seat restaurant, with kitchen and balcony bar, will take up a whole floor of the building and ’celebrate the context of the space’, says Rhymer, who is not designing it as a restaurant space, but instead bringing in props to support the theme.

’There will be a receptionist playing [1980s radio show playbacks of] Steve Wright in the Afternoon, old printers, telephones and even someone doing data entry in one corner,’ says Rhymer. ’We don’t have to create a restaurant.’

’It’s going to be a bit Canary Wharf meets David Brent,’ says Rhymer, who is being helped to dress and design the space by Peter and Paul. Lee Davis, designer at Peter and Paul, says the brand will be ’presented like a corporation’. A computer-paper aesthetic has also been used across communications.

Another built environment work is the result of the festival’s £40 000 Bank of America Merrill Lynch Create Award, which has gone to Folly for a Flyover (concept pictured), a semi-permanent arts and community centre being developed by the collective Assemble, which will sit in an undercroft beneath Hackney’s A12 flyover. Work starts at the end of this week and the structure will be ready in June. During the Create festival it will host workshops, performances and film screenings, before being given a new community purpose until August, when it will be recycled.

The Assemble collective comprises designers, artists and architects. Co-founder Alice Edgerley says it has sought to create what appears to be a domestic-styled residence, but made from timber bricks.

Opening the Create 11 programme on 29 June will be Brief Encounters: The Future of Public Art in London, which focuses on Olympics projects across the capital.
Speakers include head of Art on the Underground Tamsin Dillon and 2012 Olympic Park artist-in-residence Neville Gabie following in the footsteps of Ai Weiwei, who was given the role for the Beijing 2008 event. Gabie is part-way through a 15-month tenure that started in October 2010 and runs up to the Olympics. He must deliver a series of responses to the Olympic site as it is being constructed, ’to make its stories visible away from the park’, Gabie says.

Several projects are now being developed to tell these stories, which include ’the community of bus drivers who drive three internal bus routes, and the people doing all the gardening and the planting’.

In June, Gabie will talk about the freedom he has been given to access the site and interpret it without a restrictive brief from the client.

Gabie reveals that one piece will recreate a photograph based on a painting ’using a lot of people who worked on the park in the photograph’. There will also be an accompanying website.

The work, to launch in July, will look to ’make a connection between people working on the park, sports and venues’, says Gabie, who reveals that his other pieces will involve film and photography.

He is also looking to reimagine what was a large collection of artists’ studios at Yardley’s perfume factory on Carpenters Road on a site that now hosts the Zaha Hadid-designed Aquatics Centre.

Gabie’s work and that of his contemporaries, including Grayson Perry, will be on display at another Yardley’s building in September.

Other highlights of Create 11