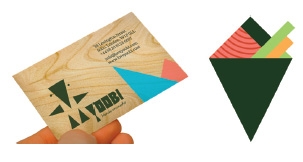 A new sushi restaurant concept, Yoobi, is set to launch in London’s Soho, with branding by Ico and interiors by Gundry & Ducker.

The identity design is based on a temaki sushi proposition rolled sushi that can be eaten in the hand, sitting in the restaurant or as a takeaway.

The restaurant owner approached Ico in August 2010, and the consultancy in turn sought out an architectural practice using a pitch process.

Ico has looked to Japan, Brazil and London to develop the brand, which it also named inspired by the Japanese word yubi, Japanese for ’fingers’. This is to reference the informality of the offer, which doesn’t require chopsticks, says Ico.

The ’Y’ of Yoobi and a brand character are used as a graphic device to reference the conical wraps the food is served in. These triangular shapes also map a geographical triangle between London, Brazil and Japan, Ico says, and form a theme which is continued inside the restaurant.

A full Ico-designed website will replace a holding page in June and the restaurant in Lexington Street is set to open in July.

Inside the restaurant, Gundry & Ducker’s design is based on what Ico design director Vivek Bhatia calls ’a wooden box’ encapsulating informal seating and a central open kitchen area a white, faceted counter.

Design highlights include several bespoke one-off pieces of seating and a brass line that runs along the contours of the space and breaks away to form design features like coat hooks.

Bhatia says the branded space also considers the triangle of Japan, Brazil and London. Temaki sushi is served in Brazil, where the owners discovered it, and as such its dark green wrap colouring is referenced in both the brand and the space.

There will be ’blue and pinky red’ highlights referencing Brazil’s carnival atmosphere, says Bhatia. ’The respectfulness of Japan, the playfulness of Brazil and the artistic nature of London’ will pervade the space,’ he adds.

A whole new game in pack art has emerged