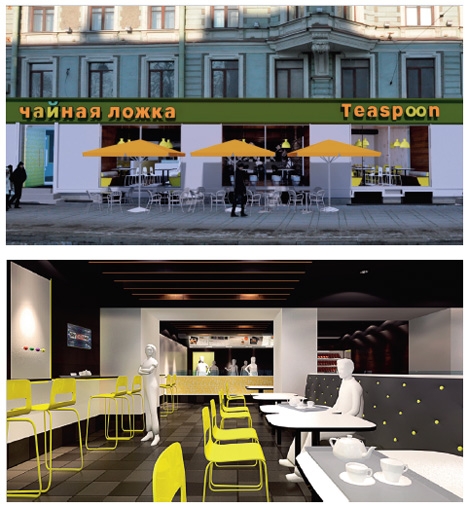 SHH has created a new brand, visual identity and interiors concept for Russian tea and pancake house chain Teaspoon which is aiming for an international launch.

SHH initially worked with Teaspoon four years ago to create its Saint Petersburg outlet, having been appointed without a pitch on the strength of previous work.

Roll-out plans for the concept were then halted because of the recession, during which time market research by SHH highlighted shifts in the demographic and spending patterns of consumers.

Neil Hogan, SHH creative director, says, ’The first branch was a test-bed to quantify the perception of its place in the market, which was very positive. The very first design went down really well we were just starting to roll it out when the recession hit.’

He adds, ’The local marketplace changed and a new concept had to take that on board. Effectively, we started with a clean slate.’

The new work includes a comprehensive rebrand and repositioning of Teaspoon. SHH created a new visual identity that aims to appeal to a wider audience, which is increasingly familiar with larger coffee-shop chains, and position the brand in line with current Russian high street offers.

SHH retained Teaspoon’s existing logo, but modified other elements of the design and colour palette. According to Hogan, ’Teaspoon historically had a very crafty, graphic and eclectic style.’

He adds, ’When the identity has been built up over a period of time, an element of visual clutter develops without looking at the bigger picture. We created something that is far simpler and better at communicating the core product and the name it’s simple and fresh.’

The new interiors have a modern, contemporary look and feel, according to SHH, with different ’semi-private’ compartmentalised zones to cater for different types of consumers.

The ’library’ area uses timber to create a ’warm environment’ where older consumers can read or play board games. The ’youth zone’ is ’unashamedly contemporary, graphic and fresh’, according to Hogan, aiming to create a space in which younger customers can socialise and listen to music.

Hogan adds, ’Teaspoon has a very smiley disposition with its food offer it is friendly and traditional, so it’s about creating a fresh, bright environment that is in contrast to the [Russian] climate.’

The first store to roll out the new concept will open in Saint Petersburg on 28 May, followed by two more sites in the city. It is then hoped that the concept will roll out across continental Europe and North America, initially in New York.