“Not everyone gets to have the start I did – I was very lucky,” says Mat Hunter. “I managed to become a designer when the talents I had were just becoming valuable.”

Hunter is a former partner at IDEO and served as the Design Council’s chief design officer from 2010 to 2015. For the last five years, however, he has been working towards a different mission: to get designers into more powerful positions across the country with his innovation hub brand Plus X.

If design is to truly be taken seriously and make a difference, then designers need to be in more positions of power he tells Design Week. Chief design officers in places like the Cabinet Office, local councils and on the boards of charities are a good start. But Hunter also wants to see designers confident enough in their skills to start their own businesses.

“There’s a sense of social justice to our mission”

But as he states, not everyone gets the chance to follow through with their ideas. A lack of funding or business training, dampened confidence and geographic preference for entrepreneurship in London means opportunities aren’t found in equal measure across the UK.

Plus X is Hunter’s attempt to address this issue. Co-founded with former tech investor and start-up advisor Paul Rostas, the innovation hub is a mixture of office space and workshops for local SMEs in Brighton. The aim is to bring product design and manufacturing back into UK cities outside of London to try and reverse the trend of business being taken overseas.

“Regional towns across the UK are full of amazing people and there’s a sense of social justice to our mission,” Hunter says. “Everyone has the right to start and excel in their own business and change the world in their own image.” 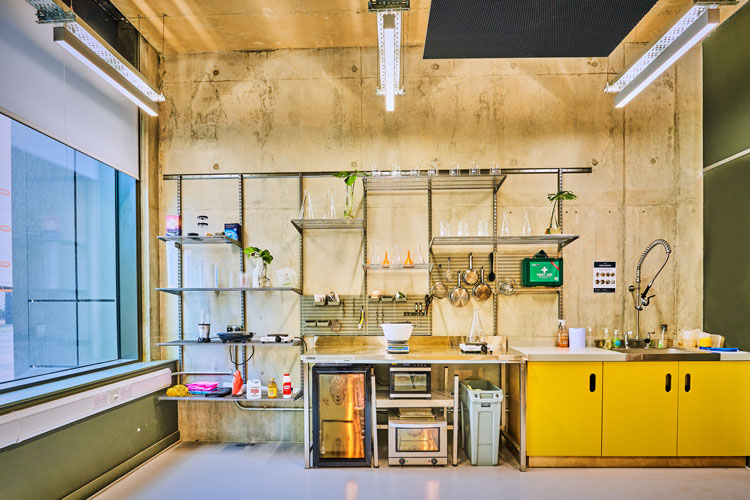 “We all got internships”

The idea, Hunter says, is to replicate the support he had during his own formative years as a designer. Hunter began his career by training in industrial design at London’s Central Saint Martins, before being accepted to the Royal College of Art (RCA) to study what was then referred to “computer-related design”.

“It was a relatively unknown world back then, where designers were helping to shape computing before the world wide web was created,” he says. Hunter recalls a time halfway through his studies at the RCA, where his small class “piled out” to Boston to the annual ACM conference. “In a small side room we demonstrated our work and we all got jobs and internships out of it.”

Hunter was lucky enough to earn a placement with IDEO, the design consultancy he would later become a partner at. The job market is rarely so straightforward for designers nowadays, he says. 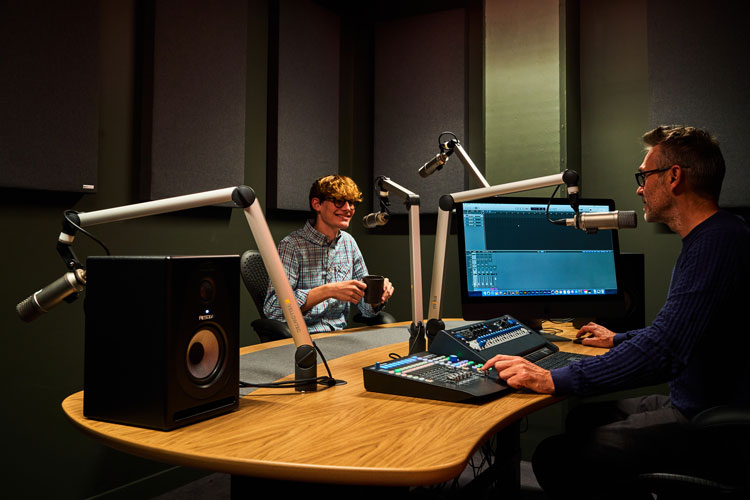 “Designers should be given the agency to be leaders of solutions”

Several years later, when Hunter was elected as chief design officer of the Design Council, he focused his attention on getting designers into decision-making roles. This work was the precursor for Plus X’s mission today, he explains.

“When I first joined, we were linking designers with manufacturers and clients who needed something,” he says. “If we wanted some new hospital furniture, we worked with an SME manufacturer, and would then pair them with a designer to act as a consultant.”

It was a system that worked successfully, but Hunter says he wanted to see what would happen if designers were given the opportunity to start their own businesses and design services of their own.

“I thought designers should be given the agency to be the leaders of solutions, not just the followers of someone else,” Hunter says.

“They start by cooking things up in their kitchens”

Part of his work then and now is about instilling confidence in designers to realise their ideas. This can only be done with a well-established support network, funding and facilities.

He says Plus X Brighton will provide “wrap around” support to this end. The onsite BRITE programme, which is in the process of attracting new local businesses and start-ups, will provide government funding worth £10.5 million to the area.

“What I find wonderful is that often with these designers, who have decided to make a new material for example, they start by cooking things up in their kitchens,” Hunter says. Incidentally, one of Plus X’s founding members is Lucy Hughes, who won last year’s Dyson Award for her invention MarinaTex, a plastic alternative made from fish waste. She developed the material in her student flat kitchen.

“So really these people need two things: they need better, safer facilities to get out of their kitchen, and they need the confidence and ability to recruit others for their cause,” he says. In the case of designers making new materials, he says this would likely include bringing material scientists on board. 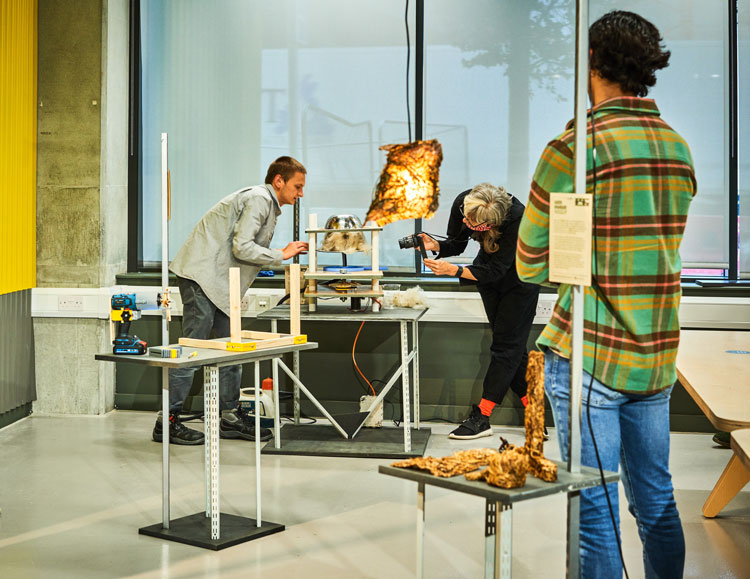 “The role of innovation in our recovery will be huge”

Seven months into the global coronavirus crisis, in which countless designers have had their work uprooted, Hunter says his purpose is clearer than ever.

“Not only have we seen regional cities face worsening economic inequality during the pandemic, but the role of innovation in our recovery will be huge,” he says. “The pandemic has accelerated trends that were already at play and if we feel time is on fast forward, we need to give designers the opportunity and resources to react.”

Hunter says multiple examples from the past seven months indicate design skills are “more relevant than ever”. He points to graphic design being used for public health communications, or product design employed to make vital equipment like ventilators and masks, as examples. 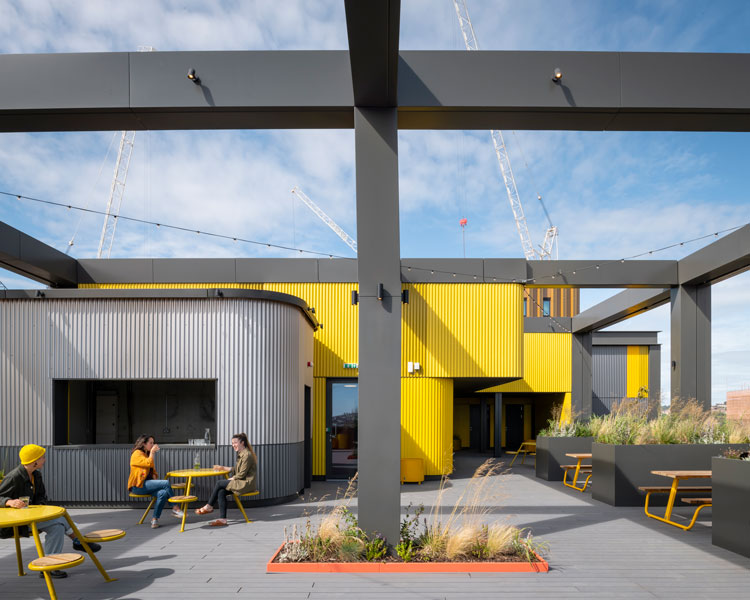 “It’s all too easy to feel alone right now”

The pandemic presents an interesting challenge to Hunter’s Plus X, however. Lockdowns have forced designers and creatives out of offices and studios – is opening a physical workspace really the right thing to be focusing on right now? It’s a topic Hunter feels passionately about.

“It’s been interesting to see that some digital companies like Twitter and Google have told employees they can work from home forevermore – I believe that’s problematic,” he says. “Working from home in its entirety can be difficult and I believe getting people together physically is incredibly important.”

Doing so, he says, creates a sense of confidence, and also maintains mental wellbeing for designers. He adds: “It’s all too easy to feel alone right now.”

“We might never go back to our five-day-a-week commute into the city centre, but I believe physical space for designers still matters hugely.” 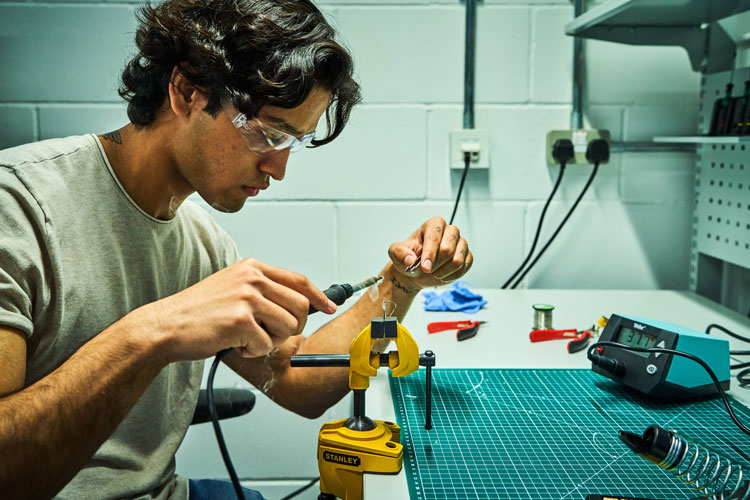 So, against the backdrop of economic uncertainty, what advice does Hunter have for designers?

“I would encourage designers to ask themselves what they actually want to see changed and consider what kind of organisation is best placed to help them realise that,” he says.

While he says working for a consultancy or an in-house team are “honorable and really necessary roles”, he hopes designers know there are places for them beyond just that, and he says he is working to ensure that is the case. Plus X has plans to open several new sites across the UK in the coming years, thanks to a partnership with development company U+I.

“I’ve been excited to see more choice, and I hope that continues, so that designers can take those opportunities and shape the world how they wish to see it,” he says.