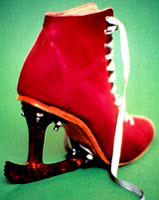 The fast pace of fashion today puts constant pressure on designers and manufacturers to come up with a constant stream of new ideas. This sometimes turns the twice-yearly catwalk shows into more of a historical procession, or the spoils of a raid on the local charity shops: more reinvention, less innovation. After all, the basic silhouettes can’t change that much, bodies are bodies and clothes have to accommodate them.

Textiles and fabrics are the key to creating styles and trends that look to the future. Decoration and embellishment are currently “hot” for mens and womenswear. The traditional handcrafts such as embroidery, beading, appliquÃ©, hand knitting and weaving are being used in a contemporary way. At the same time, designers are turning to technology for non-woven fabrics that have not been used as “fashion” fabrics and to non-textile processes such as photography to exciting effect. Some fashion and accessory designers design their own textiles – others collaborate with textile designers, many of whom move on to launch their own collections.

The Fabric of Fashion, the British Council’s touring exhibition, illustrates the influence of textiles on fashion design. The show features the work of fifteen designers: some are established talent, but others are young, emerging names who are pioneering the use of new technologies and traditional craft skills. The curators – Sarah Braddock, who teaches textiles at Goldsmiths College in London, and Marie O’ Mahony – have already written a definitive and fascinating book on the revolutionary uses of textile technology, lavishly illustrated with examples from top designers such as Helmut Lang, Alexander McQueen or Donna Karan, who is quoted as saying that she believes “technology is the future of fashion”.

Both the book and the exhibition feature the work of B. Earley – a textile designer who worked for Karan, Karl Lagerfield and Etro before producing her own range of printed clothing using a special heat photogram printing process. This allows her to print objects on to fabrics at a scale of one to one – producing a rather ghostly X-ray effect.

Earley’s fabrics range from shiny synthetics to a fleece made from recycled soda bottles. Her work verges on art – in 1999, as a public art commission, she created gowns for cancer patients at the Queen Elizabeth Centre in Birmingham, printed with medicinal plants.

Knitwear designers include Hikaru Noguchi – who worked for designers Matthew Williamson, Kookai and Nicole Farhi and as a design consultant to Habitat, before producing her own successful collections which were shown at London Fashion Week. She experiments with textures and patterns, knitting by hand as well as with machines. Despite her Japanese origins, she is inspired by British crafts, updating the look of Welsh blankets and Fair Isle, Shetland and Aran Patterns.

Jo Gordon originally trained in sculpture in Aberdeen but went on to gain her Masters degree in millinery at the Royal College of Art. She then created headwear for designers including Yohji Yamamoto and Comme des GarÃ§ons. Now she markets her own range of quirky knitted hats and accessories. She is inspired by 1950s knitting patterns and by nostalgic references to childhood holidays in Scottish Islands. Carol Fraser – who originally studied graphics before her MA in Fashion Knitwear at Central St Martin’s – also updates old knitting patterns, creating handmade designs or working with domestic machines for a one-off effect. Her knits are detailed and incorporate beading, sequins and embroidery.

Nigel Atkinson combines traditional techniques with hand-printing of Expandex and he has recently been working with Bengali craftsmen to produce his own collection of luxuriously embroidered and mirrored garments and accessories.

Menswear design brand Vexed Generation uses modern materials such as Outlast (which changes it’s state depending on the temperature) with a layer of ballistic nylon. In this case it is as a protector against climate changes, but the material can also be used to produce bulletproof vests. The clothes combine immaculate tailoring with finishing touches that are printed, beaded or made of reflective foils – the result of the synergistic partnership of a fashion and a textile designer.

Hussein Chalayan, acknowledged to be one of Britain’s foremost cutting edge designers, has come a long way since his first (unforgettable) collection was shown at Central St Martin’s – all the garments had been buried in a back garden and dug up again just before the show. He has worked with textile designers, architects and product designers. With Sophie Roet he developed a fine woven fabric used as an overdress, with a glowing underdress underneath. Eley Kishimoto designed a pixellated paint fabric for Chalayan based on computer images, but with hand-drawn flowers. Chalayan’s “airplane” dresses made of moulded glass fibre and resin – you use a remote control device to open and close panels on the dress revealing a frilly pink tutu – were devised with product designer Paul Topen.

At last month’s London Fashion Week most fashion pundits had high praise for the collections of Sophia Kokosalaki (ex-Central St Martin’s) who is guest designer for Ruffo Research, an Italian leather company supplying Prada and Jil Sander which explores new finishes and techniques. Also hailed as ones to watch are Roland Mouret and Marcus Lupfer. In addition, Anthony Symonds was applauded for his aptly named collection Trailer Flash. Symonds, winner of the Marks & Spencer New Generation Sponsorship for the second season running, designs sexy, strong and sophisticated clothes. His fabrics are luxurious and he also designs his own striking prints. He graduated from Central St Martin’s in 1994, winning the Design Graduate of the Year Award. His current collection features suede, fine silk crepes, and duchesse satin, which undoubtedly appeals to his glamorous client list, reputed to include Madonna.

Shelley Fox showed successfully at London Fashion Week and her work is to be shown in the exhibition at the Crafts Council. She is trained in both textile and fashion design and creates many of her extraordinary fabrics in her own studio/ laboratory. She sources materials from outside fashion, using material with stretchy Elastoplast fabric which is transformed by stretching, manipulating, burning and scorching it. She layers transparent materials, and uses laser beams and sound waves that strike the cloth with “invisible heat”. Coupled with her unorthodox geometrical pattern-cutting, her clothes manage to be unconventional but still feminine. Her latest collection is based on the famous World War II Enigma Code, with actual configurations used to break all the codes printed on some of the garments.

Boudicca comprises the talents of Zowie Broach and Brian Kirkby. They are unconventional designers who showed their latest collection at London Fashion Week. Boudicca previously collaborated with textile designer Savithri Bartlett for some of the pieces in the exhibition. Her painstaking research while at the RCA led to the use of thermoplastic non-woven and moulded seamless pieces, and laser-etchings. She is currently pursuing a PhD at Loughborough University, collaborating with the engineering department, and with another designer, Manel Torres at the RCA. Bartlett says: “Throughout history, designers have created a moulded image of the woman of the time – no one has addressed the woman of today, with her desire to enhance her frame through medical intervention such as plastic surgery.”

Boudicca and Bartlett worked with a Harley Street plastic surgeon, taking a cast of a patient and making a fibreglass mould. Dyed, non-woven fabric was placed around the mould, clamped into place and baked in a kiln at a high temperature. Once cooled, it was ready to be worn on the catwalk. Another garment is Parcel Jacket – which looks like brown paper packaging buttoned with postal packaging tape. Zowie Broach says, “We need to work globally to gather information on new fabrics and new ways with older methods – like starching that was used for collars and cuffs, or new inventions, like fabric impregnated with energy-giving fragrance, or a relaxing smell like lavender, or using new materials like those that are being developed for protecting crops.”

Techno Textiles, by Sarah Craddock and Marie O’Mahony, published by Thames and Hudson, retails for £16.99. The exhibition The Fabric of Fashion is at the Crafts Council Gallery, 44a Pentonville Road, London N1, from 9 November 2000 to 14 January 2001