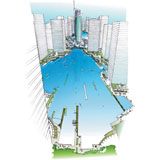 Covering an area roughly the size of London’s West End, the development will offer residential, retail and office buildings, with 79 towers set in a four-lake landscape that is being artificially constructed for the community.

Portland was appointed to lead the ‘community design’ aspects of the site itself, following an international tender a year ago. The masterplan has just been given the go-ahead by DMCC. The consultancy’s scheme focuses on the ‘user experience’ and includes the overall landscaping and urban design, developed in partnership with Craft Pegg.

Although Portland has drawn up branding guidelines for site-wide communications, further design opportunities may arise from Jumeirah Lakes Towers as each developer will handle the naming and marketing of the towers it is constructing. The centrepiece, 63-storey Almas Tower, is owned by DMCC and will be used by the diamond industry – Almas means diamond in Arabic.

Portland’s signage and wayfinding system is inspired by the idea of light refracted through a diamond, with the colours identifying the clusters of towers in the development. On the lakeside, each cluster of skyscrapers will display a series of ‘vertical circulation towers’ that will use this colour system, acting as an important wayfinding device to people on the ground.

‘We look at a project like this as being about visitor communications and their journey at the ground level, rather than taking an architectural approach,’ says Portland managing director Ibrahim Ibrahim.

The masterplan includes the creation of retail zones, realised through a series of squares and plazas, each responding to the needs of each tower’s population.

‘It is about forming a series of districts – such as areas for food and drink, kids and entertainment – and then developing a strategy for retail that matches those districts,’ adds Ibrahim.

To offer the dynamics of a conurbation and vary the ‘mood’ of Jumeirah Lakes Towers, Portland has marked out districts with a ‘faster pace and rhythm’ and punctuated them with ‘slow-paced areas’. ‘The public realm is so often neglected in developments of this size,’ says Markham Darbyshire, creative head of developments at Portland. ‘The hierarchy of the public realm we have created starts at the micro level of the individual squares and gardens, then the districts and finally the development as a whole.’

• Towers built by a range of developers, which will handle their own marketing

• 45% residential, 21% office space, with the remainder to be hotels or mixed-use