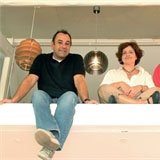 Design duo Mood refuses to be put off by the slowly developing industry in its native Portugal, and is looking to overseas markets instead. Clare Dowdy meets the pair bringing pendant lights out of the shade

The Portuguese design scene can be summed up as young and multidisciplinary. Many of the people designing products and furniture also turn their hand to websites, graphics, exhibition stands and interiors.

This, they say, is the nature of design in Portugal. It’s a fledgling industry still finding its feet, yet to be fully appreciated by clients and consumers. In fact, many designers laugh at the idea of there being a design industry at all in Portugal.

In some respects, design consultancy Mood bucks the trend. Its founders, Rita Muralha and Raul Santos, have chosen to specialise in one discipline, and Mood is finding favour with clients both at home and overseas.

The duo specialises in lighting – mostly in the form of hanging lamps and chandeliers. ‘We like designing lamps best because we are architects by training,’ says Muralha. ‘Light is a very important component of architecture and can really change a space. We think of it as working with architecture in an interior way. Lighting and architecture make a very happy marriage.’ 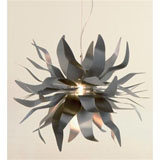 Mood, which was founded in 2001, moved into lighting after Santos and Muralha made lights for their friends one Christmas. These presents were so well-received that they have been focusing exclusively on lighting for the past three years. And this single-minded approach appears to be paying off.

Their Gg shades hang in all the Portuguese outlets of Buondi coffee chain; a vast and intriguing chandelier illuminates the reception desk of Klaus K, Helsinki’s first design hotel, which opened last year; and Mood is now in talks to design the lighting for an international restaurant brand’s first foray into Portugal. Meanwhile, its Flake light bedecks London’s Truman Brewery, and a smaller version is launching in November at Rabih Hage in London, as part of the Portuguese Design Point of Sale promotion.

Mood’s profile got a boost from its showing at Milan’s Salone Satellite exhibition last year. ‘Portuguese designers have to get a reputation abroad before they can be accepted at home,’ says Santos, a frustration echoed by many of his contemporaries.

Despite the fact that nearly all of Mood’s output is hanging lamps, there is real variety in the designs and materials. Flake is made of industrial felt, with each piece attached to the next by shirt studs. The idea was that it could be sold as flat pieces in a pizza box. And, while Gg is ceramic, UFO is formed of acrylic slats, which fan out from the bulb.

This concentration on pendant lighting seems somewhat perverse, given its recent chequered history in Portugal. ‘In the 1980s and 1990s, pendants became a bit hated, because there were only crystal chandeliers,’ Muralha explains. It is almost as if Mood is trying to restore the good name of such overhead lighting. The group’s single foray into floor lighting is Planet, a spherical piece comprising a series of geometrical forms in MDF. 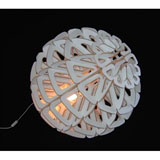 All these ranges have one thing in common: they are about indirect, rather than direct, lighting. ‘We like creating shade and atmosphere,’ Muralha adds. Despite the drawbacks of working in such an underdeveloped design industry, in a country whose once-thriving manufacturing businesses are under threat from low-cost countries such as China, Mood’s attitude is positive.

Perhaps it helps that Mood’s working style is not hampered by too much stress and worry. The four-strong company operates out of a unit in a row of single-storey buildings on the outskirts of Lisbon. These units were full of designers in the 1970s, but now have a pleasingly forgotten air. And if there is a sudden rush of work on and late nights are called for, Santos makes good use of the studio’s mezzanine level. This is where he switches the lights off and takes his power naps.