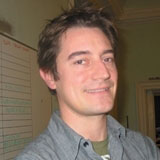 Scotland’s national design centre The Lighthouse is to appoint editor and publisher Nick Barley as its next executive director, Design Week can reveal.

With a remit to promote the organisation on the world stage, Barley (pictured) has been selected from a final shortlist of four British contenders, following an international hunt to find a successor to Lighthouse founder Stuart MacDonald, who left in June (DW 11 May).

Chosen in part for his international connections, Barley brings a commercial background in communication, as current editor of Scottish listings magazine The List and a former publisher of Blueprint and Tate Magazine.

‘Nick is very knowledgeable about architecture and design, but also very adept at dealing with the media, which is important for us. It is also refreshing to have someone who is not from a museum or cultural institution background,’ says Lighthouse chairwoman Janice Kirkpatrick.

Having found its feet since it was established seven years ago, The Lighthouse now needs to enhance its global reputation, according to Barley. ‘The Lighthouse needs to open up, both internationally and within Scotland. There’s no doubt about that,’ he says. ‘Exhibitions are a starting point, but we need much more than that. And we need to shine out way beyond the heritage of Charles Rennie Mackintosh.’

Barley takes up the role in January next year and says he will look to build relationships with other design centres worldwide. His stints in publishing have seen him work with current Design Museum director Deyan Sudjic and Architecture Foundation director Rowan Moore, both journalists. However, no formal collaborations with these organisations have yet been established.

Although The Lighthouse has a remit to champion design to the public, Barley also hopes to build better connections with designers and architects themselves. ‘They should certainly use it more often and this is an area for improvement. It is also The Lighthouse’s job to improve Scotland’s economic performance through design. Scotland has been slower to realise the benefits to businesses of using design and creativity.’

Barley will now ‘put his stamp’ on The Lighthouse’s existing strategic plan, which will be presented to the board next month, according to Kirkpatrick. He will also take over leadership of the Six Cities Design Festival, a programme instigated by MacDonald and set for launch by Scotland’s First Minister Jack McConnell next week (DW 10 February 2005).

• Set up August Publications in 1998, publishing books on design and architecture

• Curator and designer of exhibitions including Citroën DS: La Déesse at the Design Museum (1991) and international touring design exhibition Lost and Found (2000)