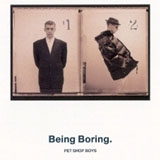 They may dislike the word ‘arty’, but few pop bands exercise as much control over their image as the Pet Shop Boys or are as clever with it.

‘When you put two people together and make one thing of them,’ Neil Tennant observes in this lavish survey of their 20-year visual output, ‘they become a kind of trademark.’ The brand formula of a suited Tennant, looking as arch as Noel Coward, and a baseball-capped Chris Lowe, scowling beside him, was established early. Not unreasonably, it’s been said that their most effective piece of design is themselves.

But their principal creative ally has been the graphic designer Mark Farrow. Minimal, yet luxurious, his sleeves for the albums Please (1986), Actually (1987) and Behaviour (1990) achieved Persil-bright marketing cut-through.

In 1993, however, the duo shifted gear. The album Very had a ‘tactile’ orange box by Pentagram – raised dots for greater sensation? – that ushered in more artifice (operatic sets, Go West helmets and the like) as a reaction against dour, scruffy grunge. This is where you grasp Catalogue’s main argument: that the Pet Shop Boys are the missing link between Kraftwerk and Gorillaz, since they have ‘morphed from “real” group members to fantastical marionettes’ and, recently, back again.