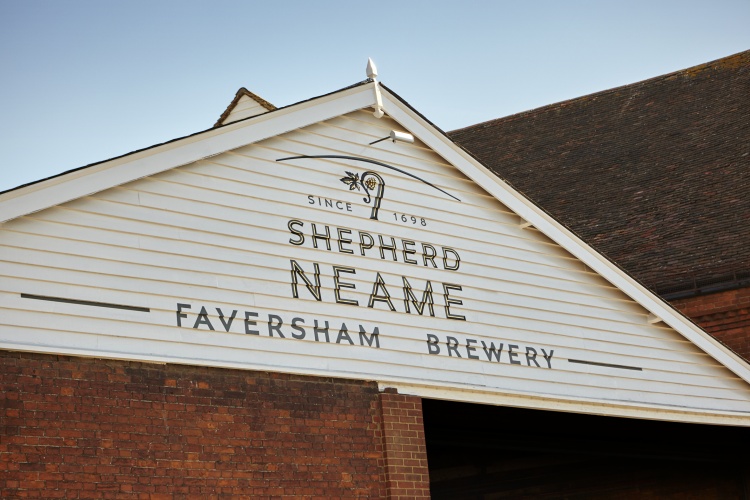 Britain’s oldest brewery Shepherd Neame had a drastic rebrand this week, swapping out its signature red logo for something a little more stripped back.

Shepherd Neame was founded in 1698 in Faversham, Kent, and is the brewery behind beer brands including Whitstable Bay, Spitfire, Asahi and Oranjeboom.

Consultancy JDO Design has completed the rebrand, and has kept the brand’s hooked shepherd’s staff symbol while cleaning up the overall motif, reducing the colour palette, and modernising the typography.

We’ll have more to follow later this week, so look out for our full story.

Apple announced it would open up a new London HQ

Apple will be closing down its eight existing London offices, and replacing them with a huge new headquarters at Battersea Power Station, we learned this week.

The new site will open in 2021 and will hold 3,000 employees, with the aim of placing “the entire team in one location”, Apple says.

The new HQ will hold 40% of the entire Battersea Power Station development, and will be the tenant with the most office space in the new area.

BHS came back – but it’s online-only

But now the department store is back – though customers won’t be able to browse the aisles.

It has been reinvented as The British Home Store, an online retailer selling a selection of the company’s best-selling kitchen and dining ware, with clothing to follow soon.

The website, which launched this week, has been designed in-house by Florence Bryant, according to BHS, and has recruited “the majority of people” who previously worked for the department store’s online offering.

BHS adds that the online platform will be “the most customer-friendly in the market”, and shoppers will be able to order and check out “in two clicks”.

Networking site LinkedIn unveiled a new desktop website design this week, which looks like the social media platform is moving closer towards its less-work-orientated competitors.

The new site brings the desktop version closer to the LinkedIn app, and places more emphasis on the news feed, encouraging site members to post more blogs and status updates.

It also includes a Twitter-inspired trending news column, and suggests profiles for specific users to follow. It even has a more intuitive chat function, borrowing the instant messaging idea from sites such as Facebook, with chat boxes now popping up at the bottom of the screen.

LinkedIn says the design aims to be “cleaner, simpler and more intuitive” for users, and is expected to start rolling out by the end of 2017.

Sir John Sorrell, who founded the Creative Industries Federation in 2014, announced this week that he will be giving up his role as chairman by 2017.

The Creative Industries Federation is a national membership organisation for the arts, creative industries and cultural education, and rallies government for investment in the UK’s cultural sectors to secure its future.

Before setting up the Federation, Sorrell set up charity the Sorrell Foundation in 1999, chaired the Design Council, and started festivals including the London Design Festival in 2003 and the London Design Biennale, currently in its inaugural year.

Sorrell will take up a new role at the Federation as founder president, and the organisation is currently seeking a new chairman, which it says will be a “sought-after board post” across the UK’s creative job scene.