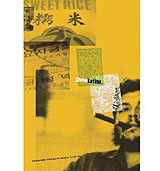 Park Plaza Hotels launches a restaurant brand created by Anderson Norton this week, which will roll out as the chain opens new hotels.

Chino Latino, a ‘fusion restaurant’ offering a mix of Asian and South American food, launches at the Park Plaza in Nottingham. The concept will be rolled out across new hotels for ‘at least the next three or four years’, according to Park Plaza food and beverage manager Stephen Bench.

‘Although restaurant concepts have short lifespans, we hope to roll this out to at least four hotels,’ he says.

‘We’ve developed a colour structure that allows us to interchange colours to keep the look fresh and all the restaurants will feel quite personal,’ he says.

Inspiration for the look came from early 1960s film posters and the challenge was creating a visual identity that would fit in with the interior concept, which Norton describes as ‘dark, square and angular’.

The consultancy’s work will be applied across signage, menus, stationery and other merchandising like coasters and match boxes.

Anderson Norton, which has worked with Park Plaza Hotels for two years, was appointed to the project in August. Israeli consultancy Branowitz Kronenberg created the interiors.