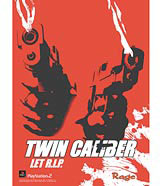 Rage has unveiled a £400 000 identity and accompanying marketing push for its new PlayStation 2 computer game Twin Caliber this week.

The design brief, awarded to Fathom following a two-way pitch against Source in July, called for packaging, viral e-mail marketing and advertising posters across the press, London Underground and outdoor hoardings.

The campaign is aimed specifically at 15to 30-year-old hard-core PlayStation fans, although it is hoped casual users will be encouraged to try the game.

‘The purpose of the brief is to establish the game as a brand in its own right with strong visual imagery that can’t be pigeon holed,’ says Rage product manager Cheryle Wilkinson.

Consoles are becoming increasingly difficult to market effectively in the crowded gaming market, according to Fathom director Huw Thomas. He is confident the packaging and campaign will distinguish the brand from rival products.

‘Within the gaming industry there is a preponderance for 3D rendered imagery. We’ve moved towards four-colour graphics that enable the product to stand-out on the shelf,’ says Thomas.

He adds, ‘Given their short shelf life, manufacturers are now also understanding the need to implement a consistent through-the-line message to consumers.’

Gamers were given a taste of the campaign two weeks ago at the PlayStation Experience show at London’s Earls Court.