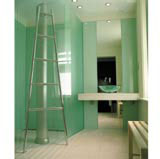 Quirky only begins to do justice to JÃ¼rgen Bartels, or JB as he is universally known. He is intelligent and driven, but there’s a twinkle behind his steely eyes and his smooth, well-rehearsed patter belies a child-like spontaneity that occasionally bubbles over.

The ‘legendary hotelier’, as he is usually referred to in print, is chief executive officer of Le MÃ©ridien hotels group, whose portfolio includes Grosvenor House, Russell, Hyde Park and Waldorf hotels in London as well as flagships all over the world. Bartels has been in the business since 1956, when he was 16, and became chief executive officer of Le MÃ©ridien last July.

Le MÃ©ridien is one year into a development programme. This has included a slew of management re-organisations, travel scheme launches and, most importantly, the development of the Art + Tech hotel room concept, designed by exhibition specialist Real Studios.

Despite a down cycle in the hotel industry before the 11 September 2001 events, let alone after, Bartels is investing heavily in new rooms and renovation, the opposite to most of his rivals. ‘What better time to deliver new rooms and renovate existing properties, in time for economic improvement in 2004?’ he asks.

To be precise, he is investing £280m in renovation, which has been revised down from £850m the previous year. Quite a hike, but, he insists, still a hefty sum.

‘Long-distance travel has taken a knock. The further people travel, the less price sensitive they become, which is why US travellers are such an important market in Europe. But the same works in reverse, too,’ he says. So the plan is to woo monied guests back with intelligently designed, locally-relevant hotel rooms – the anathema to big corporate hotel chains. Which is, of course, precisely what Le MÃ©ridien is.

Bartels talks about design with the eye of an impassioned outsider, not an expert. But he was enlightened enough to appoint Real Studios in late 2000 despite or, more likely, because it had absolutely no hotel experience.

‘We interviewed several teams of designers, but when they presented their portfolios, they all had hotel experience,’ Bartels says. The cheek. ‘We were looking for something different. Yvonne [Golds, Real Studios director] had worked in museums and exhibitions, and as a result could bring expertise in art, lighting, colours and budget discipline,’ he explains.

Real Studios created a brand identity and literature in conjunction with graphics group Surface 3, as well as uniforms in collaboration with designer Norma Gosling.

So what percentage of the £280m has been set aside for design? Bartels tells me it’s a ‘tiny sum of money’, and it’s a good half a minute before I realise he’s joking. But he won’t say what it really is – ‘we don’t engage in percentages’, he says, steely again.

The Art + Tech rooms, of which there are varying numbers in Le MÃ©ridien hotels, aim to combine art sourced locally (‘no one wants to look at French art outside France’, he says, and I’m confused again) with hi-tech bathrooms, electronically controlled beds and 42-inch plasma TV screens. It’s a simple concept, but Real Studios has brought an exhibition designer’s flair to it with dramatic coloured wall panels and coloured gel applied to light fittings.

The ‘art’ element comprises works designed specifically for each hotel, taking inspiration from the building itself, the locality or nearby galleries and museums. This is vital to ensure each hotel maintains its own individuality, Bartels says.

‘Americans founded the idea that all [hotel] rooms around the world have to be the same. That was wrong then and that’s wrong today,’ he says. ‘We want clean lines [and] less is more. Women in particular are becoming more and more design conscious, and they want bigger bathrooms. The men are hardly likely to object,’ he says.

‘Bathrooms used to be utilitarian, gold and ornamental and aimed at men. The new generation of hotel-goers doesn’t want that.’

Real Studios’ initial concepts ‘tested’ well and had an ‘approval rating of 97 to 98 per cent’, he says. A total of 3000 Art + Tech rooms will be available internationally by the end of 2003, and London Le MÃ©ridien hotels, Hyde Park, Russell, Grosvenor House and Waldorf, all feature varying numbers of them already. A series of international openings is planned for next year, from Minneapolis to Hamburg, but Bartels is particularly excited about Turin. Interrupting me mid-question, he springs up from his seat to show me drawings of a former Fiat factory in the city that is being transformed by architect Renzo Piano into a mixed-use space including an art gallery and a Le MÃ©ridien hotel.

So what about the other rooms that haven’t been Art + Tech’d? Real Studios is developing a new concept, under wraps until November, which marries ‘conservatism with avant garde’, Bartels says. ‘[Golds] is currently designing sample rooms for us. We’re really happy,’ he insists.

1978 President of Ramada’s hotel group in the US

1983 Appointed chief executive officer and president of Carlson Hospitality Group, a post he held for 12 years

1995 Joins Westin Hotels and Resorts as chairman and chief executive. His portfolio includes the Sheraton brand