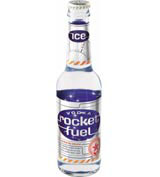 Rocket Fuel, set up by vodka enthusiast Fraser Koutts in 1997 to provide a premium quality vodka with a stylish appearance, was initially sold over the Internet.

To date the company’s main client base has been in the Far East. Distribution agreements have been signed in Scotland and the product will be available in England before Christmas.

The revamped look features a clear porthole on the front label, which reveals constellations on the inside of the back label that shimmer when held up to the light.

The consultancy was appointed in February without a pitch.