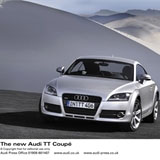 Back in the late 1990s, the Audi TT took the design world by storm, but does the new TT Coupé stand a chance of matching the success of its predecessor? asks John Stones

From its origins as a sketch on a napkin by Freeman Thomas, the Audi TT – love it or hate it – emerged as one of the few truly original car designs of recent years. Launched in 1999, it remained unusually true to the concept car that first saw the light of day in 1995. While the passing of time and widespread imitation may have made the TT’s shape familiar and robbed it of some of its impact, the TT remains a seminal design. It’s one of the few creations from the relatively insular and conservative world of automotive design to have caused wider ripples. The TT was, for instance, the first car to win a D&AD product design award.

Despite poor reliability and indifferent dynamics (inherited from the Volkswagen Golf on which it – like the new version – is largely based), the TT became a roaring sales as well as design success, selling in volumes Audi never envisaged. Its appeal was largely down to its design, which Audi credits as having had a strong impact on people’s perception of the brand.

The new TT has a lot to live up to and, at first sight, seems unlikely to win the same design accolades, though it’s more or less a foregone conclusion that it will still sell like hot cakes. ‘Audi schmaudi’ is the verdict of Andy Davey, founder of TKO Design. ‘The 1990s original was about Modernism and zeitgeist. The new TT is like the difficult second album or a film sequel. It looks a little bit leaden, a little bit lederhosen even. The pendulum of progress has swung away from vain dentists’ cars anyway towards cleverer, more sociable vehicles – more from less, in other words.’

Sebastian Conran, a director at Conran & Partners, is equally underwhelmed. ‘I always liked the original, stylistically. It was completely different and looked like nothing you had seen before. The new one has lost its defining character. It’s been sucked up into corporate DNA,’ he says.

‘It’s a shame Audi has lost the clean purity of not just the TT, but the rest of the range,’ agrees Dale Harrow, director of vehicle design at the Royal College of Art, and an avid fan and owner of the original TT.

When the manufacturers have a hit on their hands, such as the TT or Mazda’s MX5, the temptation is to play safe. Each subsequent iteration becomes merely a reworking of the original, accompanied by a watering down of the original design integrity. 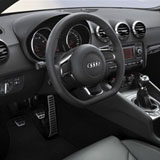 While it might be argued that the original design establishes a brand in its own right, sometimes, in the process of reinterpretation, conflicts arise between the original design concept and subsequent design fashions. For instance, the new TT keeps its distinctive silhouette and proportions, but these are overlaid with Audi’s new, much more ornate design language, including the deep, corporate grill that is often compared to the beard of company chairman Bernd Pischetsrieder. Like rivals BMW and Mercedes, Audi seems to have ditched its austere, finely-honed approach for something much less subtle, perhaps as a sop to the tastes of potential buyers of luxury cars in emerging markets, such as China and Russia.

The TT’s original designer, Thomas, has long since left Audi and has now rejoined J Mays – who also claims a hand in the Audi TT – at Ford. The new car was designed by a team led by Audi design director Walter de’Silva, whose work for the German marque has yet to achieve the acclaim dished out to his creations at Alfa Romeo in the 1990s. The first new TTs will hit these shores in October and, when we see it in the metal, perhaps then we will be able to start making our definitive judgements.