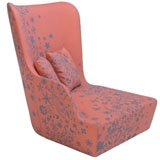 The big names were all at this year’s Milan Furniture Fair, but the new fairground has had a big impact on the fringe. Lynda Relph-Knight reports from a show that has become more polarised, yet gathered a new momentum

There’s something quite uncomfortable about standing on a packed underground platform when an empty train slides eerily on to the platform. Within seconds the crowds have embarked, crammed into the train and are whisked underground into oblivion.

This was the experience at Rho-Pero, the last stop on Milan’s newly extended ‘red line’, which serves the city’s new exhibition halls. Whichever way you travelled, the journey was horrendous as fair-goers crammed onto the trains for a journey some 20 minutes longer than the trip to the old fair site.

But, once there, it all makes sense. The new complex, designed by architect Massimiliano Fuksas, makes it easy for visitors to tackle the mammoth fair, with halls eight and 12 and the adjacent tented Salone Satellite showcase of younger talent clearly marked for those looking for contemporary wares. Put simply by Sheridan Coakley, who has returned to the fair with a stand encompassing his original company SCP and the launch of Case, his joint venture with Paul Newman, ‘It works.’

The fair works all the more because the organisers have tempted in some of the leaders of the burgeoning fringe, giving it an exuberance that was previously lacking. Armani-owned retailer and patron Cappellini has abandoned its erstwhile home at Superstudio, in the newly fashionable Zona Tortona, to the south of the city, to take a huge stand at the main event, albeit with a less than sparkling collection, including chairs by Jasper Morrison and Tom Dixon. Meanwhile, Italian furniture giant Cassina makes a bold appearance at the fair, having previously only shown new lines in its showroom in Via Durini.

The big designer names were all there: Philippe Starck at an overly clinical, lacklustre Tecno and, alongside Piero Lissoni at Cassina, Jasper Morrison and Tom Dixon at Cappellini; Ron Arad, Tord Boontje, Patricia Urquiola and Ross Lovegrove at Moroso; Matthew Hilton, Robin Day and Terence Woodgate at Case; and the Campana Brothers at Edra, to name but a few.

But moves into the mainstream have watered down the impact of the fringe, particularly at Superstudio and the nearby Superstudio Piu. The absence of the likes of Cappellini and SCP from the former has meant more space for Thorsten van Elten’s growing UK business and significant launches, and Moooi, which hedged its bets by showing both at the fair and at Superstudio with a dubious collection of fashionable kitsch.

But, by boosting visitor numbers to the fair and – partly because of the extended journey – the amount of time people spent there, numbers were down elsewhere. Piers Roberts, co-founder of London-based Designersblock, says that, though in his view, he and partner Rory Dodd put on their best ever show for this, their sixth year in Milan, in visitor terms they were back to square one.

‘I would say we had more trouble attracting visitors due to the fair being out of town and a novelty attraction. There was a lot of money being spent this year, limited time for visitors and all the independent shows had a tough time competing,’ says Roberts.

In true Designersblock style, though, the duo did run a successful bar and nightclub. This was ‘conceptually producing an event as an “event”, rather than a dry re-run of whatever else you would find anywhere else’, says Roberts.

Meanwhile, a less than crowded Superstudio Piu had lost the UK ‘umbrella’ stand Hidden Art to Salone Satellite – where it offered arguably the strongest collection there and had a good result.

‘From what I’ve heard from our exhibitors, most have made excellent contacts – with retail trade and manufacturers, as well as other serious buyers. As the Salone is subsidised by the Fiera and no additional publicity needs to be undertaken, the cost is much cheaper than being in the fringe,’ says Hidden Art founder Dieneke Ferguson.

Back at Superstudio Piu, the smaller grouping put forward by Midlands-based Different by Design was a bold effort to put ‹ across a relatively complex venture that brings industry and design together, but it wasn’t, perhaps, in the best place to hammer that message home. 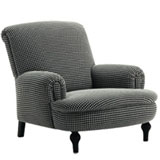 But it’s not all bad news on the fringe. Star turns included UK-based Established & Sons, which showed an impressive collection by big names such as Zaha Hadid, Future Systems, Jasper Morrison and Barber Osgerby one year on from its launch and threw the biggest party. It will be interesting to see how it fares now, with its celebrity-meets-function style. Then there was Swarovski’s chandelier show – a fixture of the fringe – where Naoto Fukasawa’s typically subtle design contrasted sharply with Gaetano Pesce’s glimmering, kinetic ‘jellyfish’ fitting.

Meanwhile, the fashion stores of the city centre hosted various events. Among these, the most successful was Arad’s show at Dolce & Gabbana, and then there was the curious juxtaposition of avant garde Dutch collective Droog above the Trussardi showroom.

So the fair has polarised, but, in doing so, it has become re-energised. All it needs now is for the manufacturers to pick up more of that energy, as they regain confidence in innovation and the fringe to live up to its name once more, with original ideas to provoke and stimulate.