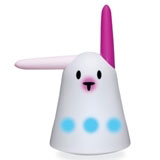 Billed as the latest must-have hi-tech gizmo, Nabaztag is a ‘smart rabbit’ that is permanently connected to the Internet through a broadband wireless connection. Designed by Paris company Violet, Nabaztag retails at £80 and is available from the Design Museum in London.

Biz-R has created the brand identity and packaging for Holy Cow Organic, a range of organic dairy products launching this week.

Lumsden Design Partnership’s concept for London’s Transport Museum café will feature versions of the iconic moquette seat fabric, which was originally produced in black, orange and yellow. Pictured is the first concept visual of the space, which will open as part of the redeveloped museum in May 2007.

The Metropolitan Works Show 2006 will exhibit furniture, lighting and homeware designs from a range of UK designers at the Pulse show, at Earl’s Court in London, from 21 to 24 May. Pictured is Bakebean’s Clean Light, which will be featured in the show.

Vision Express is launching a retail concession at its flagship Oxford Street store in London as a joint venture with fashion designer Lulu Guinness. The retro-styled space is by exhibition designer Pentalpha, with illustrations by Martin Welch. 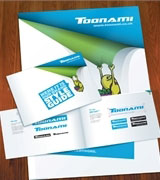 Studio Output has designed the branding and campaign materials for Channel 4’s T4 on the Beach event, which takes place in Weston-super-Mare on 18 June. It was produced in collaboration with 4Creative.

Fold7 has designed a visual language and identity for children’s television channel Toonami (pictured), as the station moves to build brand awareness. The work will be applied across all print material.