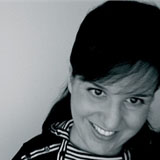 Teresa Monachino has combined her love of typography and the English language in a book that gently subverts and questions the art of expression. Trish Lorenz talks to the designer with a passion for words

Typography is the art of detail. By its nature, it appeals to those in quest of perfection and Teresa Monachino fits the bill. Composed, reserved and considered, she is wholeheartedly committed to precision. And she has been known to read Eric Gill’s autobiography in bed at night.

It’s fair to say she’s committed to type, a penchant for which she readily confesses. ‘I’m a stickler for typography,’ she says. ‘I learnt letterpress, not on Macs, and I still think it’s the only way to learn.’

But she’s also half Italian and, in a rare moment of excitability, she lights up and calls the publication of her first book, Words Fail Me, ‘il destino’.

‘I’ve always been really into words,’ she says. ‘I carry a book around with me and write things down, collate things. After a while I realised it wasn’t a disparate collection of thoughts, it was mostly about words and ideas.’

But she ‘never thought for one minute’ the collection would have mass appeal. ‘I would never have approached a publisher,’ she admits.

Monachino studied graphic design at the Chelsea School of Art and Design and graduated in 1990, whereupon she moved back to her home town, Bath, and designed book jackets for local publisher Redwood Press, before working for design group Creative Concepts. 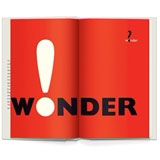 In 2001, she moved to Scotland and worked for 999 Design, before transferring to the company’s London office in October 2003, where she is design director today.

It was in London that she met Alan Fletcher, a designer whose work she had always admired, through a friend. And that, she says, ‘is the il destino bit’. In his role as creative director at Phaidon, Fletcher encouraged her to show her ideas to the publishers.

The result is a 128-page book filled with gentle humour and genuinely interesting anachronisms of the English language, all set in Monachino’s immaculate typography.

Why, it asks, is abbreviation such a long word? And does monosyllabic really need five syllables? One section, entitled Antigrams, is essentially composed of ‘sinister’ anagrams – where ‘Elvis’ becomes ‘lives’, ‘honestly’ turns into ‘on the sly’ and ‘astronomer’ translates as ‘no more stars’.

Another section, Antagonyms, highlights words that are ‘spelt the same and sound the same, but directly oppose each other in meaning’. Monachino points to ‘left, which means departed and remaining’ as an example.

She was inspired to write the book by her Italian mother, who ‘finds the nearest English word to the one she wants and uses that’.

‘When you explain to someone, point out to them that they have used a word incorrectly, you realise that sometimes there is no logical reason why it’s incorrect. You just have to say, “well, it might not make sense, but that’s how it is”,’ explains Monachino.

She talks of her mother with fondness and mentions her young nephew more than once, but gives little else away about herself. ‘I have no hobbies, really. I like the usual London things’, she says, adding, ‘Design is not a nine-to-five job, it’s my whole life.’

When asked about her future plans, she says she’s considering another book, this time on typography. It’s nearly complete, but there’s one page she’s not happy with, so ‘it’s stayed in the drawer’. 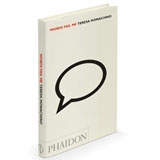 Monachino is, without a doubt, a perfectionist. She thought seriously about self-publishing Words Fail Me to retain total creative control, spent ‘three days solid’ kerning it and took convincing that adding a colour was a good thing. ‘It’s about words – the words speak for themselves, they explain their meanings through design and typography. It’s not some zany design book,’ she maintains.

She also has a keen sense of humour, which delights in the sublime and verges on the dark. Her business card, for example, is deliberately simple – plain white card with black and red type – but has ‘do not touch’ embossed in Braille on the reverse.

Finding the right typeface for her book, unsurprisingly, took ages. In the end, she was re-reading Eric Gill’s autobiography in bed one night and, in a serendipitous moment, found a comment he makes about refusing to learn the English language because it makes no sense. And so the book is set in Gill, a point that perhaps best reflects both Monachino’s obsession with her art and her gently offbeat sense of fun.

Words Fail Me by Teresa Monachino will be published by Phaidon in May, priced at £7.95