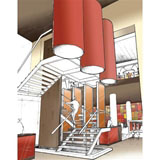 London consultancy SHH has created the brand identity and interior concept for a £2m three-storey, 300-seater restaurant called Nu Asia, which will open in Bahrain this winter.

The restaurant is being launched by Al-Hilal Enterprises Group and will be located at Al A’ali shopping mall, situated in Bahrain’s capital city, Manama. It marks a new direction for the company, which typically runs more traditional Bahrain-style restaurants. ‘Most of our customers will not have seen anything like this before,’ says Hamad Isa, managing director at Al-Hilal Enterprises Group.

SHH’s scheme has been developed to give a modern, European feel, which fuses the various cultures reflected in the restaurant’s menu/ Nu Asia will serve a combination of Chinese, Indian, Japanese and Thai food. The identity uses the vivid spice colours typically found in Asian food and the mosaic patterns found in local ceramic design.

The interior scheme has been structured around three interlocking cubic designs, each one clad on the outside with contrasting materials to create different atmospheres.

An entry staircase is rendered in Galala marble, which is also used across the front section of the restaurant floor, with a darker stone area demarcating a different rear zone. The upstairs dining area design creates several zones, which are linked by an opaque glass bridge.

SHH has produced bespoke lighting, including large-scale installations, which will be scattered throughout the space. It has also developed furniture designs for the restaurant complex. The consultancy was appointed 15 months ago.

‘This is a family-run business. It was a challenge to mix the various cultures and the different cuisines. We used a lot of image boards and got this feeling across in our use of colour,’ says David Spence, chairman at SHH. The restaurant-build is currently on site, with implementation by Lewan Engineering. Nu Asia will be the fourth restaurant to be located within an extension being developed at the shopping mall at Al A’ali.