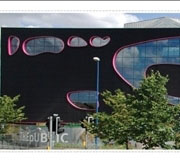 The future of high profile West Midlands cultural venue The Public looks increasingly uncertain as it emerged that its chief executive has been made redundant and design consultancies remain unpaid.

Trouble continues to plague the urban regeneration and cultural centre scheme, as 14 members of staff, including chief executive Sylvia King, were laid off at the end of last week. This throws into question how the organisation will be run.

King was responsible for leading the multi-million pound project, which fell into administration in March, after its costs spiralled to £54m, some £14m over the intended budget (DW 30 March).

The culling of staff forms part of a wider reorganisation process being carried out by administrators Pricewaterhouse Coopers. The intention is to get the scheme back on track, although further redundancies might be made.

A spokeswoman for Pricewaterhouse Coopers declined to comment on the future leadership strategy.

‘It is regrettable for the individuals, but the charity can not support the previous levels of employment. We hope to be able to deliver a successful business model for the charity, which will ensure its ongoing viability, albeit on a smaller scale,’ says Ian Oakley Smith, joint administrator at Pricewaterhouse Coopers.

However, people close to the project remain confident that the scheme – including its series of interactive galleries and artwork installations – will be completed, despite the fact that many of the designers and artists are still owed money in project fees. Digit, All of Us, Ben Kelly Design, Tomato and General Public have all consulted or created designs for the venue.

It was initially hoped that work could commence in June, but this is looking unlikely as the administration process has been prolonged.

The Public’s headquarters is designed by architect Alsop. It will hold galleries, a conference and events space, restaurant and bars, a public square and educational facilities. The Public is a community arts-based charity that runs art projects in West Bromwich and the surrounding area.

Alsop — headed by Will Alsop – was sold for £1.8m to SMC Group in March and subsumed into the network as SMC Alsop. SMC Group is run

• The Public design team includes architect Will Alsop and consultancies All of Us, Digit, Tomato, General Public and Ben Kelly Design

Foreign alliances are a positive asset to any business